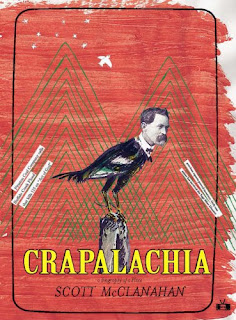 The Publisher Says: When Scott McClanahan was fourteen he went to live with his Grandma Ruby and his Uncle Nathan, who suffered from cerebral palsy. Crapalachia is a portrait of these formative years, coming-of-age in rural West Virginia.

My Review: Memoir...I remember...that's what makes this book so damn good, Scott remembers and he tells us that he remembers, wants us to remember with him. I've never lived in West Virginia, I've only driven through it in my expensive car and thought, "ye gods and little fishes, is this for real?!" and pressed a little harder on the gas to get the fuck out of there. I've never even spent a night there. I drove an extra hour out of my comfort zone (6 hours behind the wheel is enough for me) so I wouldn't have to.

But I remember with Scott McClanahan. I'm 20 years older than he is. I've lived the entirety of my life in upper-middle-class assurance of comfort and joy. When I haven't had any money, I've had friends and loved ones and even random strangers who shared with me. And it never, ever looked like the pictures Scott paints in my head.

It's beautiful, this picture, these pictures, but it's not pretty. It's warty and cold and shaped funny. But oh how much there is to celebrate in the life of a kid who knows where home is and what his family is made of and scoops up the mud he's standing on to make something new of something old.

She hobbled along some more and I walked behind her.
She said: "This is the grave I wanted to see. This is the grave."
I asked: "Whose grave is it?"
I walked in front of the stone and I saw it was her grave. It was the grave of Ruby Irene McClanahan, born 1917 died...
Then there was a blank space--the space where they would put the date of her death.
She touched the shiny stone and explained...her really good deal on the tombstone. She told me I should start saving. It was a good investment.

The tales of this Crapalachian boy are muddled and mixed, of course, as all memories are, and as honest as they are, they aren't always factual. In the appendix to the book, Scott tells us the places he knows he mashed things up and rearranged them, since after all he was writing a story and stories have their own needs. But he never violates, not once in this book, the one Commandment of Memoir: Condescend not, lest ye be caught and pilloried. (See: James Frey.)

Why read some thirtysomething kid's memoirs? What kind of philosophical point can someone that young make? I wonder, is it even necessary to make a point? Can it be enough to read a book like this, about a young life seen from middle age (can't be much under 35, this kid, and that's spang in the middle of life), and eat the textures and smell the regrets of someone new to the idea that The End applies to him, too? He has children, he tells us so. He tells us that he went from place to place in the world leaving dirt from West Virginia there, giving the dirt to strangers and leaving it in the soil of New York City and Seattle and suchlike. So his children, no matter their wanderings, would have something of their, his, his grandmother's home waiting.

I don't know that I believe him.

"Oh lordie, I'm feeling horrible," she said. Then she clutched her chest. "I'm having chest pains." I kissed her cheek and I said, "I'll see you next week." She told me my grandfather Elgie used to have nightmares begging for the whistle to stop.
She wasn't dying.
She was lonely.

So I left and I heard Ruby shouting again, "Oh lordie, I'm dying." I didn't turn back. I wasn't sure we were even born yet. We were all inside of a giant mother right then and we were waiting to be born. Just like tomorrow, at dawn, we will be held in the arms of a giant mother. We will find warmth and maybe even war there.

I want us all to be ready.

Ready? We're none of us ready, ever. As his kids grow up he'll find that out.

And then there's the story of the little girl and the locket. It's near the end of the book, it's a memory from adulthood. It made me cry for a half-hour, angry and hurting and so so sad, helpless in the face of a world we've made with action, inaction, consent, and indifference (driving faster to escape someone else's reality ring a bell?).