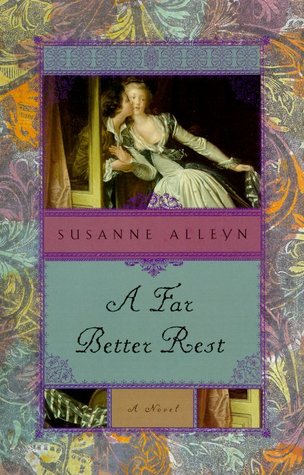 The Publisher Says: A Tale of Two Cities is the story of Charles Darnay and Lucie Manette, but Sydney Carton is the hero who makes the ultimate sacrifice for love. Sydney disappears from the novel in London and turns up years later in Paris to bring the story to its heartbreaking end. A Far Better Rest imagines his missing personal history and makes him the center of this tragic tale. Born in England of an unloving father and a French mother, Sydney is sent to college in Paris, where he meets Charles Darnay and the other students who will have enormous influence on his life and alter the course of French history -- Robespierre and Camille Desmoulins among them. The beauty and kindness of Charles's wife, Lucie Manette, affects Sydney so deeply that he secretly devotes his life to her happiness.

Sydney becomes a major participant in the formation of the French Republic at the end of the eighteenth century and a witness to one of the most gruesome periods in history, as the significant people in his life fall to the guillotine. A Far Better Rest is a novel of passion, identity, and history that stands fully on its own.

My Review: The Doubleday UK meme, a book a day for July 2014, is the goad I'm using to get through my snit-based unwritten reviews. Today's prompt, in honor of Bastille Day, is to select your favorite novel set in or about France.

Okay. I know this will come as a surprise to y'all, being as how I've kept it such a closely guarded secret, but I have to say this right up front: I don't much care for the novels of Mr. Charles Dickens.

I know, I know, pick your jaws up from the floor, I'm sure you'll recover from the shock soon.

Now, with that bombshell out of the way, consider this: I am rating a book based on Mr. Dickens' dreary, interminable, turgid, jelly-bodied clunking clanking gawdawful sentimental absurdly overblown....

I am rating this novel, even factoring in its source, at four stars. And wanna know a secret? I've read all Alley's Aristide Ravel mysteries, set in Revolutionary Paris. And her novel The Executioner's Heir. And her short fiction, Masquerade. And her non-fiction Medieval UNderpants (I mean, how could one not read something titled Medieval Underpants?).

So absorb for a moment the improbability of a man with the discernment and good taste to loathe Dickens picking up this novel in the first place; reading a snatch of it and getting hooked; buying the Soho Press hardcover at retail; and becoming such a fan that he's read what there is to read by the author.

So I'd say that makes this my favorite novel set in and or about France. Why? Because I've read a lot of books, and unlike most historical fiction, this book reads like it was written by a person from that time who simply, inexplicably, happens to be alive now. The same is true of her Ravel mysteries. I don't know how she does it, exactly, but Alleyn handwaves away the 225 years between the Revolution and today. Forget you're reading a hardcover that did not cost you a month's wages. Or a Kindle whose mere existence would be a marvel to the people you're reading about. And you know what? You *will* forget those things.

I love immersive reads. I love to lose myself in a time and a place not here and not now. And Susanne Alleyn has done that for me again, and again, and never failed to make me happy I've spent time in her company.

Best of all? The Kindle edition of this book is a whopping $2.99. Please go buy it. This author deserves our support!

This work is licensed under a Creative Commons Attribution-NonCommercial-ShareAlike 3.0 Unported License.
Posted by Richard at 12:20 PM