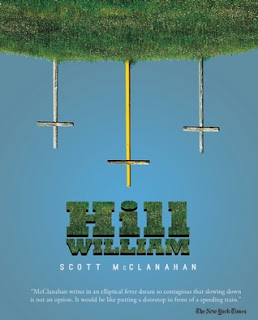 The Publisher Says: Beginning to read Hill William is like tuning into a blues station at 4:00 a.m. while driving down the highway. Scott McClanahan's work soars with a brisk and lively plainsong, offering a boisterous peek into a place often passed over in fiction: West Virginia, where coal and heartbreak reign supreme. Hill William testifies to the way place creates and sometimes stifles one's ability to hope. It reads like a Homeric hymn to adventure, to the human comedy's upsets and small downfalls, and revels in its whispers of victory. So grab coffee, beer—whatever gets you through the night—and join Scott around the hearth. Lend him your ear, but be warned: you might not want it back.

My Review: The Doubleday UK meme, a book a day for July 2014, is the goad I'm using to get through my snit-based unwritten reviews. Today's prompt, lucky number 13, asks us to discuss a novel with the best title. I think this is about it.

Now surely y'all remember my review of Crapalachia: A Biography of Place from 2013, right? How I warbled myself hoarse over its 4.5-star glory? Sure! Okay then, go take a quick peek at it and get back in the head of appreciating hillbilly noir or hick lit or whatever we've decided to call it.

And here he is again, Scott McClanahan, to make the fat and oblivious mainstream look, really look, at life among those who don't have much, and that includes hope. This time it's explicitly labeled fiction, so no one's going to run up to McClanahan on stage at a reading and demand to know if Event X happened and when.

The reason that's still going to happen is simple: Scott McClanahan inhabits this book the way a djinn inhabits a lamp. He's on your bookshelf. He's lookin' paper-pale, somebody feed the boy some vitamin D-for-decoding! We vivify the writer as we read the writing.

Just like right now I find myself getting ready to do it.

I feel the blood surging to my head.

I feel my jaw tightening.

And that's before the page count gets to double digits. Now, some several of you aren't liking this too terrible much. It's not your favorite thing, it's not going somewhere you're interested in going...yes yes, I get it, it's challenging your definition of entertainment. It did mine, too.

Go on the trip. Yes, it's off your route, past your exit, beyond your slip. Fiction, fact-ion, roman à clef, metafiction, whatever tidy label you need to smack on the package, smack it on and open it up and settle in for an afternoon with someone who doesn't speak Cultured like a native because he isn't.

In a world that celebrates the bland venality of getting and spending, a moment like this...a scant two, maybe three hours' read for most of us serious bookheads...is uncommon and worthy of note and celebration. This isn't bland, and it's less venal than venereal. It won't lull or cosset you, but Hill William (isn't that a great title?) will not send you to bed wondering what you read that day. If anything.
Posted by Richard at 4:00 AM