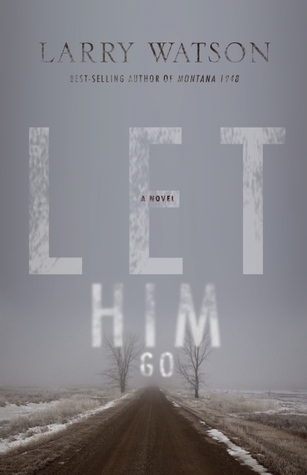 The Publisher Says: "With you or without you," Margaret insists, and at these words George knows his only choice is to follow her.

It’s September 1951: years since George and Margaret Blackledge lost their son James when he was thrown from a horse; months since James’s widow Lorna took off and remarried that thug Donnie Weboy. Now Margaret is steadfast, resolved to find and retrieve her grandson Jimmy—the one person in this world keeping her son’s memory alive—while George, a retired sheriff, is none too eager to stir up trouble with Donnie Weboy. Unable to sway his wife from her mission, George takes to the road with Margaret by his side, traveling through the Dakota badlands to Bentrock, Montana, in unstoppable pursuit. When Margaret tries to convince Lorna to return home to North Dakota, bringing little Jimmy with her, the Blackledges find themselves mixed up with the entire Weboy clan, a fearsome family determined not to give the boy up without a fight.

With gutsy characters and suspense-filled prose, Let Him Go speaks to the extraordinary measures we take for family and the overpowering instinct to protect those we love. From the award-winning author who gave us Montana 1948, Justice, and American Boy, Larry Watson is at his storytelling finest in this unforgettable return to the American West.

My Review: The Doubleday UK meme, a book a day for July 2014, is the goad I'm using to get through my snit-based unwritten reviews. Today's prompt is the eleventh in the series, discuss a book that made you cry.


Long past the moment when her neck begins to stiffen and ache, she continues to stare into the darkness, even though none of the human secrets she needs to know are to be found in the stars but rather closer to the earth her boots stand upon.

So, yeah. This book's plot is readily available to anyone who can read. You know that Margaret Blackledge lost her only son, her no-count trollop of a daughter-in-law found her a pretty face on top of a hard body and lit out for the fleshpots of Montana. Good riddance, Margaret would think, were it not for the fact that her one remaining treasure, her grandson, got swept away in the leaving. And the life that boy will be living will be full of no-count people who are no better than the law requires, and most of the time not even that. No. Margaret will not have that, not after all she went through to raise her boy up right. She has to have his son back, so she can do it all again.


A four-year-old has so little past, and he remembers almost none of it, neither the father he once had nor the house where he once lived. But he can feel the absences – and feel them as sensation, like a texture that was once at his fingers every day but now is gone and no matter how he gropes or reaches his hand he cannot touch what’s no longer there.

And those textures, those memories, they're going to be of her and her husband George, not some petty, small-time criminals like his mama fell in with.

Margaret Blackledge is a force of nature. She is a tall woman with no give to her, and believe you me, she has never given anything. She suits her country beautifully. Margaret just flat hates summer, she went a little crazy one summer from it and...well, that's a piece of story you'll find out. Summer makes a person crazy, and so Margaret waits to pack the Hudson full of her life's stuff and then tell George he's comin' or goin' but the time is now until it's September:


Autumn has come to northeast Montana. The vapor of one’s breath, the clarity of the stars, the smell of wood smoke, the stones underfoot that even a full day of sunlight won’t warm- these all say there will be no more days that can be mistaken for summer.

And I don't blame her one itty bit.

George now, he's been a sheriff for Dalton, North Dakota, and he's had to win elections before...in spite of a little drinkin' problem, in spite of being reserved, in spite of never slittin' a lip unless it was necessary:


The limitless, lowering sky, the long stretches of motionless empty prairie, the silence, complete right down to the absence of birdsong -- who knows what decides a man to leave most of his words unspoken?

But when we meet George, he's no lawman anymore, he holds boards for other men to hammer. He's done. He's been more than he wanted to be, and he's done. George has been Margaret's husband for a long time, and he's done right by her and their twin kids (Janie, the other twin, features in this story only in her absence). But now, with this trip, George is done:


Now no sign, no scorch or char, marks the place where George built the fire. Remarkable, earth's strength to restore itself and erase human effort. But memory, stronger still, can send flames as high as the roof, and shift the wind and choke George and sting his eyes with smoke...

Memories might consume him, but no one outside his skin will ever know which ones, or what he thinks of 'em. He does not give anything away, not after running a ranch he inherited from his father and mother, not after making a life in the hardscrabble grab it from the earth way of the American West, and not as long as Margaret is beside him making do, wearing out, mending up, doing without.

I think he loves Margaret, and I think he knows that his only way to show her she's loved is to do for her. So he does. And the story is George, lawman and drunk and closed-up shop, doing his all for the woman who gave him his life. It had its price, this life, but it was theirs, and they're looking at the end:


When night comes on in a room lit by kerosene, any flicker of the flame can give the sense that darkness is about to triumph.

And that's the story's unspoken edge. These two people are coming to the end, and they...she more than he...want to put something into their grandson that his soft, vapid, pointless mama won't and can't. They want to give him a sense of purpose, a purposeful life-path that won't shame him or his own kids.

Suffice it to say that the conflict between these rock-ribbed, self-contained, competent people and their shiftless opponents isn't going to play out slowly. The end comes, in fact, a bit abruptly and with a B-movie full-circleness that is *exactly* what I wanted.

But in that satisfaction comes the disappointment of getting what you want handed to you, no questions, no effort required. This beautiful story and its handsomely carved characters never launched into the glorious orbit of Montana 1948, and never plumbed the deep-downs of White Crosses. It is excellent, and it is beautiful. It should be on your shelf. It should also break into the myriad frighteningly sharp shards here:


A gust of wind doesn't suddenly bang a door open. A clock doesn't chime. The phone doesn't ring. Yet in the next instant the stillness breaks as if it is crystal.

That it never quite does makes me cry.