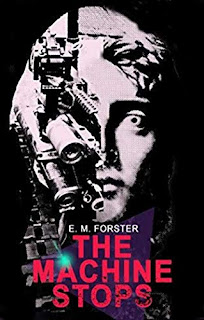 The Publisher Says: The Machine Stops is a science fiction short story (12,300 words) by E. M. Forster. After initial publication in The Oxford and Cambridge Review (November 1909), the story was republished in Forster's The Eternal Moment and Other Stories in 1928. After being voted one of the best novellas up to 1965, it was included that same year in the populist anthology Modern Short Stories. In 1973 it was also included in The Science Fiction Hall of Fame, Volume Two. The book is particularly notable for predicting new technologies such as instant messaging and the internet.

My Review: As amazing as reading about the Internet, streaming video, and instant messaging must have been in 1909, it's more amazing in 2014 to think that, 105 years ago, the ubiquity of such central facets of out lives was placed in a far distant future.

I mean really, what's 105 years in the sweep of history? It's even less impressive measured in geologic time. Electric lighting was still in its infancy then, though, and the automobile was a plaything for the very rich. Much like computers in 1989 and the Internet in 1999.

Well then. Sobering perspective on the speed of change in the modern world, eh what?

What mars this read for me is the vast amount of SFnal reading I've done in my life. Unlike the readers of 1909, I've imbibed the waters of the Styx and forgotten more than they ever knew about things predictive. And the trope of "civilization is making meat-sacks of us all, woe woe" has moved from startling insight and clarion warning to the dreary moaning of the Longface Puritans League that says not to eat anything that has any taste, do anything that is remotely fun, and NEVER EVER EVER have sex. Be miserable, it builds character, as Calvin's father would say! Live longer, as Doctor Oz would say!

Anyway, the story's free here and it'll take about a half-hour to read. I come down on the side of that being a worthwhile investment. Barely.