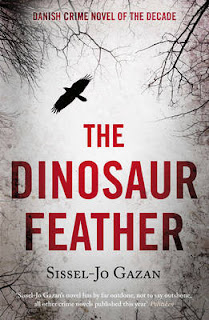 The Publisher Says: How could one man inspire such hatred?

Professor Lars Helland is found at his desk with his tongue lying in his lap. A violent fit has caused him to bite through it in his death throes. A sad but simple end. Until the autopsy results come through.

The true cause of his death - the slow, systematic and terrible destruction of a man - leaves the police at a loss. And when a second member of Helland's department disappears, their attention turns to a postgraduate student named Anna. She's a single mother, angry with the world, desperate to finish her degree. Would she really jeopardise everything by killing her supervisor?

As the police investigate the most brutal and calculated case they've ever known, Anna must fight her own demons, prove her innocence and avoid becoming the killer's next victim.

The Dinosaur Feather is the most fascinating, complex and unusual Scandinavian crime novel since Smilla's Sense of Snow.

My Review: The Doubleday UK meme, a book a day for July 2014, is the goad I'm using to get through my snit-based unwritten reviews. Today's prompt is the twenty-fifth, a book that's a guilty pleasure.

Scandicrime has, apart from Jussi Adler-Olson, eluded me. I'm not hooked, I'm not repelled, I'm simply bemused by the warbles and hoots of addicted rapture. I gave up on Arnaldur's books because grim, I disliked that Swedish guy's rape victim trilogy deeply, I can't read books starring a person named Harry Hole. I simply can't. So me and the Scandis, we're not besties.

I do, however, really really like this book. It's got a background—and ONLY a background, no sciencey stuff need slow you down—of one of the most fascinating paleontological issues around, that is the dinosaurian origins of birds. It features a detective with angst. (Hoo BOY does he have angst.) The suspect is a single mom in search of a degree to build a good life for herself and her baby. And as a bonus the victim badly needed killing, and was dispatched in a way that still fills all the nooks and crannies of my soul with schadenfreude.

So why call this almost-four-star read a guilty pleasure? Because it's relentlessly downbeat. Yes, the crime is solved, but honestly I wish it hadn't been. The dick who died? Yeah, well, pity about that, please pass the jelly. The secrets that erupt into unforgettable daylight? Better for everyone if they'd just stayed secret and life had percolated along with shiny surfaces and unpocked skin.

And I thoroughly, completely reveled in the nastiness. Shame on me! #sorrynotsorry