A Book-A-Day #15: SCIENCE FAIR, a YA novel I'd rather drink Drano than read 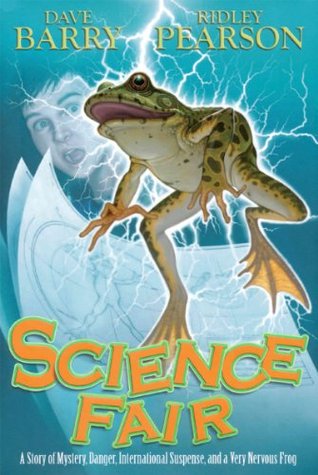 The Publisher Says: Grdankl the Strong, president of Kprshtskan, is plotting to take over the American government. His plan is to infiltrate the science fair at Hubble Middle School, located in a Maryland suburb just outside Washington. The rich kids at Hubble cheat by buying their projects every year, and Grdankl's cronies should have no problem selling them his government-corrupting software. But this year, Toby Harbinger, a regular kid with Discount Warehouse shoes, is determined to win the $5,000 prize—even if he has to go up against terrorists to do it. With the help of his best friends, Tamara and Micah, Toby takes on Assistant Principal Paul Parmit, aka "The Armpit", a laser-eyed stuffed owl, and two eBay buyers named Darth and the Wookiee who seem to think that the Harrison-Ford-signed BlasTech DL-44 blaster Toby sold them is a counterfeit. What transpires is a hilarious adventure filled with mystery, suspense, and levitating frogs.

My Review: The Doubleday UK meme, a book a day for July 2014, is the goad I'm using to get through my snit-based unwritten reviews. Today's prompt for the 15th is a choose-you-own day! Wheee, right?

Naw. I hadda go an' eff it all up by making this my Drano book of the month. (You know, the one I read because I'd really rather drink Drano than read this author/genre/what's-it.)

So as expected I hated it. It's a middle-school market book. I didn't like middle-schoolers when I was one, and I like them less now. Vicious little bastards. They're hateful and spiteful and brimful of stupid. Yuck.

But you're not the audience, comes the cry. No indeed I am not. I am an adult with forty-six years of obsessive reading behind me! And yet others have tutted and tsked because there are those of us who don't want to read YA novels. So this random example, a Kindle special today, got the nod as my test subject. I have a Zilpha Keatly Snyder novel cued up to see if it's just humor that doesn't play well to an older audience. I need a respite before I wade into that one. This could easily be the most wonderful thing a kid could find, so I'm not raggin' on it as itself. It's just so extremely ridiculously grotesquely overblown and overplayed and after all, that's how kids like 'em.

But really, moms and dads, read this before giving kids access to it. Every adult is malevolent or stupid or both. Every authority is deaf, every honest person is reviled by all and sundry. Serious question here: Do you want your kid absorbing this message? That s/he's alone against an uncaring-to-hostile world, with parents that won't listen, teachers that smell bad, take bribes, and collude with enemies of the state?

This isn't good. It panders to an invidious set of stereotypes that reinforce a helpless, whadda-ya-gonna-do passivity and does so with "humor" so it slides down their gullets easier.

This bothers the hell out of me.

Email ThisBlogThis!Share to TwitterShare to FacebookShare to Pinterest
Labels: 2-plus star review, horrible message to send to kids, July meme, YA