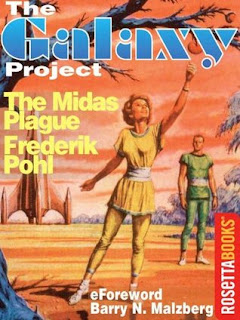 THE MIDAS PLAGUE
FREDERIK POHL
Out of print
Various prices and sellers, starting at about $6

The Publisher Says: Although the three part serial beginning in the June 1952 issue in collaboration with Cyril Kornbluth had established Frederik Pohl as a formidable contributor, this novelette in the April 1954 issue was his first solo contribution and marked him as an important addition to the growing roster of social satirists enlisted by Horace Gold, the editor of GALAXY magazine.

The audacious and patchwork concept underlying this story (the richer you are the less you are forced to consume; the greatest poverty is involved with the aggregation of goods) was Horace Gold’s and according to Pohl he had offered it to almost all of his regular contributors, asking for a story centered on the idea. The idea lacks all credibility, everyone (including Pohl) told him and everyone refused to write something so patently unbelievable until, according to Pohl, Horace browbeat him into an attempt and Pohl decided that it was less trouble to deliver something than continue to resist.

To his utter shock, the story was received by Gold and his readership with great glee, was among the most popular GALAXY ever published (or Pohl) and one of the most anthologized. Whether this demonstrated the audacity and scope of Gold’s unreason or whether it confirmed Gold’s genius (or both) Pohl was utterly unable to decide. The sculpted consumer-obsessed society was used again by Pohl a few years later in the novelette THE MAN WHO ATE THE WORLD which was far more credible (consumption-obsession as a kind of personal tyranny) and, perhaps for that very reason, much less successful, barely remembered.

My Review: Rather entertaining, in a simple way. But as I read on, I had this chill of terror...after all, in a world where there are "old" Kindles and iPhones and Galaxy tablets made in 2012, how far are we from the dystopia of this tale?

Thanks to LibraryThing Fred, I read this antique, sixty-year-old tale of consumerism's most appalling subtext writ large. It's hard not to see how this 12,000 or so word novelette would benefit from either more or less space. It would, in hands more skilled, have been side-splittingly funny. Pohl wasn't really up to it in 1954. But honestly, it was an hour spent smiling and frowning at the same time, as I processed the implications of the fact that people saw what was happening in the wake of consumerism in 1954...and did nothing.

At $6-ish and an hour or so of time, this felt like a break-even investment. I was hoping for a positive return of laughs, and got the smiles instead. But overall I'd say it's a good way to spend an afternoon. Very worthwhile for the Unlimited folks, less so for the money-spenders.