WHACK-A-MOLE, third John Ceepak Jersey Shore mystery and the best one yet 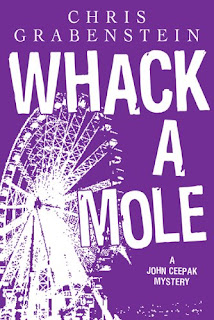 The Publisher Says: An innocent discovery on the beach in Sea Haven leads John Ceepak, the cop with an unshakeable code of honor, and his rookie partnet, the twentysomething wisecracker Danny Boyle, into the hunt for a long-dormant serial killer who might be crawling out of his hiding hole to strike again.

Like the relentless rodents in the Boardwalk arcade game, gruesome clues keep popping up all over the island as Ceepak (the former soldier who will not lie, cheat, or steal, nor tolerate those who do) finds himself up against an adversary with an even stricter code, a code he rigidly enforces.

When the killer targets his next victim, the consequences become dire for Ceepak and Boyle. This is a game they have to win!

My Review: A solid four-star outing for that Dudley Do-Right of the Jersey Shore, John Ceepak, and his wing man young Danny Boyle. One thing's for sure, the villain of the piece gets a hellacious run-around before he's brought to justice.

The first two books in the series were good fun, with lots of wisecracking and silliness from Danny, along with some very Monk-like fun-making at Ceepak's expense. This outing has the fun, less of the fun-making; in fact, the shoe goes very much on the other foot this outing. I enjoyed that.

I also enjoyed the darker and more intense pace of this entry in the series. It serves the characters well because it's about them growing up and filling in their roles as a team. There's so much more to work with in a book-three mystery, an established sense of place and a mode of communication and a web of memories to draw on. Grabenstein does all of that, stays true to Ceepak's character in every way and manages to continue Danny Boyle's maturation and education without *whap*smack*bang*ing us to notice it. In this book, Danny's lessons are pricey and yet completely relatable. Don't get me wrong, I was still hollering at the Kindle, "DON'T YOU DO THAT! NO NO!! NOT THAT!" Danny wasn't listening. In a world with smartphones, I think I can be excused for mistaking the Kindle for an old Dick-Tracy-style two-way wrist radio.

By the end of the book, when the stakes were ratcheted higher than ever before, I was over-pushing the paging buttons and having to back-track. I was that wrapped up in the ending. You know how the Big Reveal is so often the Middlin' Reveal? Not this time. Nope. Big Reveal is a biiiig surprise.

The solution to the crime isn't too shabby, either. Heh.
Posted by Richard at 8:00 AM