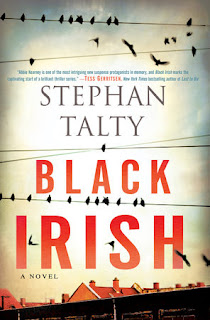 The Publisher Says: In this explosive debut thriller by the New York Times bestselling author of Empire of Blue Water, a brilliant homicide detective returns home, where she confronts a city’s dark demons and her own past while pursuing a brutal serial killer on a vengeful rampage.

Absalom “Abbie” Kearney grew up an outsider in her own hometown. Even being the adopted daughter of a revered cop couldn’t keep Abbie’s troubled past from making her a misfit in the working-class Irish American enclave of South Buffalo. And now, despite a Harvard degree and a police detective’s badge, she still struggles to earn the respect and trust of those she’s sworn to protect. But all that may change, once the killing starts.

When Jimmy Ryan’s mangled corpse is found in a local church basement, this sadistic sacrilege sends a bone-deep chill through the winter-whipped city. It also seems to send a message—one that Abbie believes only the fiercely secretive citizens of the neighborhood known as “the County” understand. But in a town ruled by an old-world code of silence and secrecy, her search for answers is stonewalled at every turn, even by fellow cops. Only when Abbie finds a lead at the Gaelic Club, where war stories, gossip, and confidences flow as freely as the drink, do tongues begin to wag—with desperate warnings and dire threats. And when the killer’s mysterious calling card appears on her own doorstep, the hunt takes a shocking twist into her own family’s past. As the grisly murders and grim revelations multiply, Abbie wages a chilling battle of wits with a maniac who sees into her soul, and she swears to expose the County’s hidden history—one bloody body at a time.

My Review: The Doubleday UK meme, a book a day for July 2014, is the goad I'm using to get through my snit-based unwritten reviews. Today's prompt is to discuss one's favorite crime novel, in honor of some British crime-novel beano.

Despite there being naggingly annoying lapses in continuity at three or four points, I was sucked into the violent and rage-filled vortex of this book from the get-go. The story, a standard one, is told at a breathless pace in direct, unpretentious language. The setting is seared into my memory. I feel as if I could find the park, drive the streets, point to the places I'd read about. I'm sure as hell not stopping for the cops there, Absalom/Abbie excepted.

The family secrets, the community guilt, the larger and wider implications of the vicious and bloody killings, make this procedural far more than an afternoon's entertainment. It's not Art, it's excitement! It's brutal and tough and doesn't give a flying fuck if your girlie-girl feelies are all bent. It's too busy setting you up for the next bashing!

I liked the hell out of it. It's good, every now and then, to sluice the nicey-nice from one's brain with a bracing dose of mean as fuck because I wanna be. There is NO oxytocin released in the reading of this book. Adrenaline, yes; androgen, oh my yes. We won't go into the testosterone release figures. Post-menopausal women are cautioned that they might find themselves assuming male secondary characteristics.

The sensitive members of the party are STRONGLY cautioned not to so much as handle this book. Don't do it, don't even contemplate it. Not for yinz.

Fans of the 87th Precinct, we found you a new writer to follow!