Book-A-Day meme #12: OUTERBOROUGH BLUES, a book that gives me a sense of place 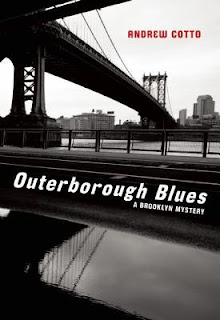 The Publisher Says: A beautiful young French girl walks into a bar, nervously lights a cigarette, and begs the bartender for help in finding her missing artist brother. In a moment of weakness, the bartender—a lone wolf named Caesar Stiles with a chip on his shoulder and a Sicilian family curse hanging over him—agrees. What follows is a stylish literary mystery set in Brooklyn on the dawn of gentrification.

While Caesar is initially trying to earn an honest living at the neighborhood watering hole, his world quickly unravels. In addition to being haunted by his past, including a brother who is intent on settling an old family score, Caesar is being hunted down by a mysterious nemesis known as The Orange Man. Adding to this combustible mix, Caesar is a white man living in a deep-rooted African American community with decidedly mixed feelings about his presence. In the course of his search for the French girl's missing brother, Caesar tumbles headlong into the shadowy depths of his newly adopted neighborhood, where he ultimately uncovers some of its most sinister secrets.

Taking place over the course of a single week, Outerborough Blues is a tightly paced and gritty urban noir saturated with the rough and tumble atmosphere of early 1990s Brooklyn.

My Review: The Doubleday UK meme, a book a day for July 2014, is the goad I'm using to get through my snit-based unwritten reviews. Today's prompt, number 12 in the series, is to discuss the book that gave you the best sense of place.

I moved to Manhattan in the 1980s, when it was still dirty, stinky, vice-ridden, and a boat-load of fun. Now it's clean and sanitary and there's a damn Disney store where there used to be hookers, drugs, and other useful things. Yuck.

Anyway, the same thing happened to Brooklyn about ten years later. This development is called "gentrification" and it's a double-edged sword. Nicer middle-class neighborhoods, no place for the poor to live...well, can't make an omelette....

Cotto's reluctant sleuth, Caesar, came to be in this country because of his great-grandmother:


My mother's mother came to this country in the usual way--she got on a boat with other immigrants and sailed from Sicily. She wasn't one of them, however: neither tired nor poor or part of any huddled mass. Instead, she traveled alone, with her money in one sock and a knife in the other, coming to the new world with an old world motive--to murder the man that had left her for America.

Such a fine, upstanding family! Things don't get a lot better in succeeding generations, and Caesar is running at top speed to get the blood-feuding nightmare of his family away behind him. So why does he agree to help the waifish French lassie, Colette, find her brother Jean-Baptist (sic)?

Because he wants some. Because the bar where he works is closing in on him. Because. He starts to search for the boy, an artist, and he gets himself tangled with some people who are where they are because it's where they want to be:


The lady in the liquor store sold me a fifth of whiskey and the landlord’s name without taking her eyes off the book she was reading.

It's clear that Cotto knows his folks well, and has their collective number. It's also clear that Caesar is walking streets deeply familiar to Cotto:


In the open sky above the hushed streets, the moon was a porcelain plate on a black table as I walked home. A breeze raised the collar of my jeans jacket as I sliced through the silvery silence, past unlit buildings and quivering trees and cars idle by the curb. The air felt like glass. I crossed empty corners under the mauve light of overhead lamps.

A more perfect, more poignant recreation of a fall night's walk in the seaport of New York I haven't read. Something that people who live here forget is that this is a seaside place, it was a port for centuries, it is spang doodle on the Atlantic Ocean, and that means the seaside is all around:


The full moon rose above the harbor as brightly lit tour boats skimmed along the black water, the brilliant cluster of lower Manhattan piled like stacks of coins from a treasure chest in the distance. Up the river, bridges arched across the wide water all the way up the east side, while the Brooklyn side was marked by soft, round lights, like a string of pearls.

I've stopped for that view any number of times in the past, and it never failed (or fails) to render me immobile with a blazing bolt of homecoming joy.

So, Caesar and his quest kick into high gear, several associates of his prove to be more than what they seem, and the more questions he asks about Jean-Baptist (sic) the more trouble he gets into. Beatings. Threats. Some sex. Memories blast our guy at every turn, all the crap he's wanted to escape from bubbles up as he searches the druggier parts of Brooklyn for Colette's foolish artist wannabe brother:


Gypsy cabs jostled and honked...Dollar vans lined the sidewalk and people piled in and out. As I walked down the slope, the buildings grew smaller and squalid. Trees vanished...and the heat picked up. Beyond the brick wall of the Navy Yard, the silver skyline of Manhattan glimmered in the distance like a mirage. The industrial remains of the flats were low and decrepit and mostly abandoned, though a few beeping forklifts unloaded trucks here and there. The storefronts were shuttered except for a bank busy with Orthodox Jews. The funk of a chicken processing plant contaminated the air.

I walked along the high brick wall that separated the Navy Yard from the street, frequently stepping over pulverized vials that sparkled like jewels on the sidewalk. There was no shade. I blinked away the dust.

Yep, been there. The Navy Yard, by the mid-1990s, was a cheap warehousing area, and the publisher whose office work I did had his books stored there. Not a super-nice place to walk at night. Fascinating history, and very different now, but this passage nails the sensation of blasting heat and stinking blight that permeated the place then.

More stuff about the search for Colette's brother turns up nasty secrets involving everyone Caesar knows, information that he uses to get a ghost from his own past laid to rest, and then *clap clap* the mystery's solved.

This made me mad. I don't like being taken on a ride and then dumped outside town, told I'm there, and left.

But you know what? Homecoming means more than how you traveled to get there. I liked the people I met on the trip. I liked the evocative landscape descriptons. I liked the sense of Caesar's working through so much about his past wasn't going to Make Shit Better, because landing him in more trouble later means more of this:


Past the projects, the land opened up and water came into view. The breeze carried rain and salt. Jetties and barrier walls supported the shore, which was stacked with crumbling brick warehouses. Out in the channel, the Statue of Liberty stood alone on her little island, her corroding flame held high in the air as the sun set over the industrial shoreline and skyways of New Jersey. Across the narrows, the bluffs of Staten Island wavered in the smoky light of dusk that turned the Verrazano into bronze. Faint light burnished water into busy with freighters and tug boats. A lone sail boat flitted in the distance. On the near shore, on a slip of water between a jetty and the land, a blood red barge bobbed on the tide.

And that, laddies and gentlewomen, is good.