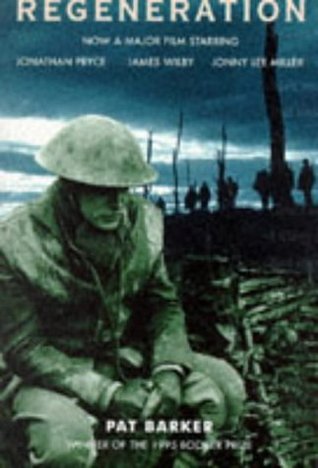 The Publisher Says: Regeneration, one in Pat Barker's series of novels confronting the psychological effects of World War I, focuses on treatment methods during the war and the story of a decorated English officer sent to a military hospital after publicly declaring he will no longer fight. Yet the novel is much more. Written in sparse prose that is shockingly clear -- the descriptions of electronic treatments are particularly harrowing -- it combines real-life characters and events with fictional ones in a work that examines the insanity of war like no other. Barker also weaves in issues of class and politics in this compactly powerful book. Other books in the series include The Eye in the Door and the Booker Award-winner The Ghost Road.

My Review: The Doubleday UK meme, a book a day for July 2014, is the goad I'm using to get through my snit-based unwritten reviews. Today's prompt is to discuss the Great War novel you loved best.

This was *hard* because there have been several, two in the past year!, Great War-themed novels that I really love. I spent a sleepless night thinking about this. I re-read portions of both my recent reads that suit the prompt, and as much as I was enwrapt in [The Daughters of Mars], feeling the swirl and ebb of tidal feeling, I was utterly immersed in [Regeneration], I felt I was *there* and I was simply, unaccountably, invisible to the characters and so not remarked upon.

I know that Ms. Barker was born in 1943...imagine! 1943! Were there *people* then?...and so could not have witnessed the events that so utterly traumatized Wilfred Owen and Siegfried Sassoon and so many thousands of other men, but you couldn't prove it by this:


Sometimes, in the trenches, you get the sense of something, ancient. One trench we held, it had skulls in the side, embedded, like mushrooms. It was actually easier to believe they were men from Marlborough's army, than to think they'd been alive a year ago. It was as if all the other wars had distilled themselves into this war, and that made it something you almost can't challenge. It's like a very deep voice, saying: 'Run along, little man, be glad you've survived'.

If that doesn't sound exactly like something a survivor would think, I don't know what does. And yet she's 25 years younger than Armistice Day! Channeling? Spirit possession? Filing clerk for the Akashic Records Office?

That last sounds about right...anyway, there we are mise en scene with the survivors, the ones confronting a world that feels empowered to judge them for their responses to stimuli unknown to mere civilians:


The way I see it, when you put the uniform on, in effect you sign a contract. And you don't back out of a contract merely because you've changed your mind. You can still speak up for your principles, you can still argue against the ones you're being made to fight for, but in the end you do the job.

Doesn't that sound like someone who hasn't had to do the job issuing a pronunciamento? An armchair warrior speaking from the privileged place of one who is defended, not one who defends. It was ever thus.

What a horror, then, to be trapped between a world that you fought to save, and that world's utter inability and complete unwillingness to learn what you lived:


This reinforced Rivers’s view that it was prolonged strain, immobility and helplessness that did the damage, and not the sudden shocks or bizarre horrors that the patients themselves were inclined to point to as the explanation for their condition. That would help to account for the greater prevalence of anxiety neuroses and hysterical disorders in women in peacetime, since their relatively more confined lives gave them fewer opportunities of reacting to stress in active and constructive ways. Any explanation of war neurosis must account for the fact that this apparently intensely masculine life of war and danger and hardship produced in men the same disorders that women suffered from in peace.

That kind of knowledge would devastate Society! Undermine the Divinely Ordained Rules! Heresy!! It must be the case that these damaged men were weak, weak I say, unmanly and unworthy! It cannot be that what they lived through damaged them by its nature, or else codified gender (and skin-color) inequality is Wrong. And we all know that it is Right!

Ugh. But blessedly, the Great War began a process of (wrenching, painful) psychic change that the Ruling Elite has been resisting, beating back, discrediting at every opportunity, and with increasing success, for 95 years:

Look at the returned Iraq War and Afghan War veterans...disillusioned, mutilated in body and in soul even when bodies are whole, record numbers of veteran suicides stand to our national, human discredit, exactly as they did then, and all because:


You know you're walking around with a mask on, and you desperately want to take it off and you can't because everybody else thinks it's your face.

If that sentence does not make you weep actual physical tears of helpless sadness and empathetic misery, you are wanting in basic human kindness.

In the end, the reason I selected this book as my favorite Great War novel ahead of all others, is this simple distillation of the pointlessness of war in the face of its costs:


And as soon as you accepted that the man’s breakdown was a consequence of his war experience rather than his own innate weakness, then inevitably the war became the issue. And the therapy was a test, not only of the genuineness of the individual’s symptoms, but also of the validity of the demands the war was making on him. Rivers had survived partly by suppressing his awareness of this. But then along came Sassoon and made the justifiability of the war a matter for constant, open debate, and that suppression was no longer possible.

This work is licensed under a Creative Commons Attribution-NonCommercial-ShareAlike 3.0 Unported License.
Posted by Richard at 12:07 PM