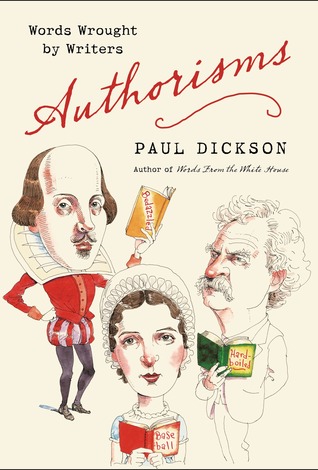 The Publisher Says: William Shakespeare’s written vocabulary consisted of 17,245 words, including hundreds that were coined or popularized by him. Some of the words never went further than their appearance in his plays, but others—like bedazzled, hurry, critical, and anchovy—are essential parts of our standard vocabulary today.

Many other famous and lesser-known writers have contributed to the popular lexicon. According to the Oxford English Dictionary, Sir Walter Scott ranks second to Shakespeare in first uses of words and giving a new and distinct meaning to already existing words (Free Lances for freelancers). John Milton minted such terms as earthshaking, lovelorn, by hook or crook, and all Hell broke loose, and was responsible for introducing some 630 words.

Gifted lexicographer Paul Dickson deftly sorts through neologisms by Chaucer (a ha), Jane Austen (base ball), Louisa May Alcott (co-ed), Mark Twain (hard-boiled), Kurt Vonnegut (granfalloon), John le Carrè (mole), William Gibson (cyberspace), and many others. Presenting stories behind each word and phrase, Dickson enriches our appreciation of the English language in a book as entertaining as it is enlightening.

My Review: The Doubleday UK meme, a book a day for July 2014, is the goad I'm using to get through my snit-based unwritten reviews. Today's prompt, the 28th, is to identify the most endearing villain in a book.

That has me stumped. So I'm ignoring it! Haha, take THAT you silly meme!

Authorisms could, I suppose, be about a villain, if you personify the English language. It's fiendishly difficult to learn, and native speakers are almost to a being woefully (or blissfully, depending on whether you're a teacher or a speaker) ignorant of the rules of proper usage, grammar, syntax, punctuation...you know, the basics.

Whatevs, the book is BIG fun and, being arranged as a dictionary, is set up for easy browsing. Dickson gives a very satisfying cross-section of author-invented words, and with great care distinguishes the nonce words from the lasting contributions to the lexicon. Goalless, for example, is an Emily Dickinson-coined nonce word...one that only appears in reference to her or her work, and hasn't been absorbed into the language...versus babbitt and its kin babbitty et alii, Sinclair Lewis's invaluable eponym for a provincial, boosterish, snobby little nobody with delusions of adequacy.

Dickson himself coined the useful and well-used demonym, personal identifier with a place such as Angeleno or Cockney. I quite enjoyed this word-book, as I do almost all word-books, and I'd recommend it to the more wordophile of my pals.

This work is licensed under a Creative Commons Attribution-NonCommercial-ShareAlike 3.0 Unported License.
Posted by Richard at 4:19 PM