Book-A-Day #31: THE DAYS OF ANNA MADRIGAL, a book reminding me of someone special 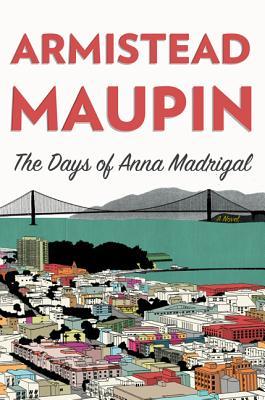 The Publisher Says: Suspenseful, comic, and touching, the ninth and final novel in Armistead Maupin's bestselling Tales of the City series follows one of modern literature's most unforgettable and enduring characters—Anna Madrigal, the legendary transgender landlady of 28 Barbary Lane—on a road trip that will take her deep in her past.

Now a fragile ninety-two years old and committed to the notion of "leaving like a lady," Anna Madrigal has seemingly found peace in the bosom of her "logical family" in San Francisco: her devoted young caretaker, Jake Greenleaf; her former tenant Brian Hawkins; Brian's daughter Shawna; and Michael Tolliver and Mary Ann Singleton, who have known and loved Anna for nearly four decades.

Some members of Anna's family are bound for the otherworldly landscape of Burning Man, the art festival in the Black Rock Desert of Nevada where sixty thousand revelers build a temporary city (Michael calls it "a Fellini carnival on Mars") designed to last only one week. Anna herself has another Nevada destination in mind: a lonely stretch of road outside of Winnemucca where the sixteen-year-old boy she used to be ran away from the whorehouse he then called home. With Brian and his beat-up RV, she journeys into the dusty, troubled heart of her Depression-era childhood, where she begins to unearth a lifetime of secrets and dreams, and to attend to unfinished business she has long avoided.

My Review: The Doubleday UK meme, a book a day for July 2014, is the goad I'm using to get through my snit-based unwritten reviews. Today's prompt, the thirty-first and (blessedly) last, is a book that reminds you of someone special.


It took so long to find you...and now I don't want it to change. I want it all set in amber. I want us and nobody else in the most selfish way you can imagine. I can't help it--I'm old-fashioned. I believe marriage is between a man and a man.

My Gentleman Caller. My own dear love.

A series of novels spanning 40 years (give or take) is bound to cope with the facts of aging, exactly as the author himself is. The dealing is by doing, as it is in every other facet of life. At least, of a life that one would want to live.

Endings frightened me for many years. They never, ever seem to look the way I want them to. I can't fathom why it took me so very long to learn that endings aren't real. The story never ends, it never begins either, it simply is. So this final installment in a series of novels I've never not set store by should have me shaking in my boots.

I'm so happy I've left the party. I'm content to be right here, right now. Anna Madrigal helped me see that more clearly than any actual physical person I've ever known: Here is where you are, so be here.

It helps to know, like Mrs. Madrigal, that all times are now, and all places are here, it's just perspective that causes things to look so different.

I've loved growing up with these books, seeing them in different ways at different times in my life, loving and hating and understanding the complex people that weave in and out of the tales. Forgiving them. Becoming so much like them that it scares me sometimes. And now, aspiring to be Mrs. Madrigal after years as Mary Ann, Mouse, Brian, and *shudder* feeling like Norman.

None of which will make even a little bit of sense to the uninitiated. Never mind, loves, it's all still there. If and when you want to find it, Barbary Lane will be there, a Brigadoon of deeply felt and nourishingly offered drafts from the Well of Loneliness.

We're all queer in our own ways. Drink it down and savor it. Try not to piss it away.

This work is licensed under a Creative Commons Attribution-NonCommercial-ShareAlike 3.0 Unported License.
Posted by Richard at 4:27 AM