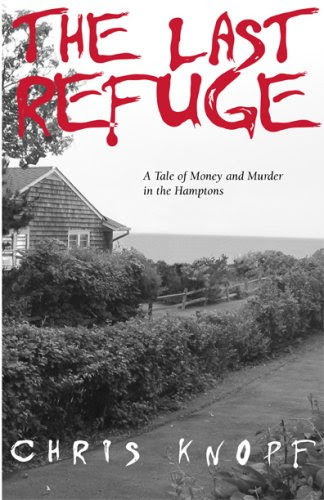 The Publisher Says: Sam Acquillo's at the end of the line. A middle-aged corporate dropout living in his dead parent's ramshackle cottage in Southampton's North Sea, Sam has abandoned friends, family and a big-time career to sit on his porch, drink vodka and stare at the Little Peconic Bay. But then the old lady next door ends up floating dead in her bathtub and it seems like Sam's the only who wonders why. Despite himself, burned-out, busted up and cynical, the ex-engineer, ex-professional boxer, ex-loving father and husband finds himself uncovering secrets no one could have imagined, least of all Sam himself.

Meanwhile, a procession of quirky character intrudes on Sam's misanthropic way--a beautiful banker, pot-smoking lawyer, bug-eyed fisherman and gay billionaire join a full complement of cops, thugs and local luminaries, the likes of which you never knew inhabited the hidden corners of the storied Hamptons: haves, have-nots and want-to-have-at-all-costs. Some deadly. Like Dr. Gernard Ricux in Camus' The Plague, tragedy has given Sam Acquillo an excuse to go on living-if for no other reason than to satisfy his curiosity, and may be buy a little time before succumbing to the existential despair that has brought him to the brink.

My Review: Damaged systems engineer, divorced dad, and all-around working class hero Sam Acquillo retreats to his parents' old cabin in North Sea, a part of Southampton Township that us rich white folk used to call "Blackhampton", aka the working class part of New York's trendy and eternally inflating Hamptons. Sam's licking his wounds after a messy divorce from Boston/Connecticut Aryan-from-Darien Abby, and his scandalous separation from his Fortune 500 corporate employer, after beating up the revolting toady who wants to sell Sam's division to the highest bidder without regard to its consequences for the engineers he supervises.

Sam's horrible old-lady neighbor, Regina, dies; she's got no heirs, she's got no money, she doesn't even own the home she's occupied for over 50 years. And Sam, who has nothing but time on his hands, doesn't buy the manner of her death: she drowned in her bathtub. Problem is, she had severe arthritis, and used the cottage's (separate) shower. This gets Sam's problem-solving brain occupied for the first time since his divorce. And thereby hangs the tale of the first-ever Long Island Noir mystery novel. What he discovers during his nosing about the facts and the fallacies of his tiny North Sea peninsula neighborhood's past and present makes him appreciate anew the peace and solitude he left behind when he chose to become the champion of truth and justice and the populist way; he cannot go back and he doesn't want to go forward, yet he knows he must make his choice. And so he does. And nothing in North Sea can ever be the same.

Oh wow. What a fun ride! What a delight to have this book that harks back to the Dashiell Hammett "Continental Op" books! And all set here on Long Island, mah home! I loved reading the author's supple, decriptive prose; I loved the author's ability to make me invest in and care for the flawed hero main character, and I was bowled over by the clear-eyed populism of the author's presentation of the social issues plaguing the Hamptons. I have friends in East Hampton who experience the world in the same way as Sam Acquillo does. It's very exciting to see that on the page, as anyone who's read a book that "gets it right" about their home partch can tell you.

Then there's the modern dearth of real, heartfelt NOIR in fiction and movie-making. Characters who've lost everything, and so can't be scared. Situations that're based in the real concerns of real people. Problems that have no counterpart in most mysteries and thrillers, but should.

Then there's the downsside. The copyediting **rots**. "Noyac Rd." in ****dialogue**** oofwince...and on the facing page, "Harbor Road." Oh now really. You can get it right on one page and not on the other? grrrrrrr

But in the end, well, the beauty of the book is simply in its characters and its ability to draw you into its lie-filled world. Sam, his love interest Eddie the dog, and the women who want them are deeply involving. I care about them, and I want to read more about them.

This work is licensed under a Creative Commons Attribution-NonCommercial-ShareAlike 3.0 Unported License.
Posted by Richard at 3:40 PM