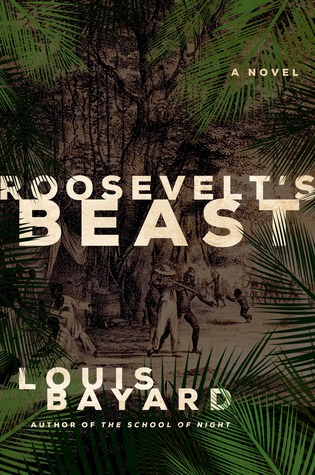 The Publisher Says: 1914. Brazil’s Rio da Dúvida, the River of Doubt. Plagued by hunger and suffering the lingering effects of malaria, Theodore Roosevelt, his son Kermit, and the other members of the now-ravaged Roosevelt-Rondon scientific expedition are traveling deeper and deeper into the jungle. When Kermit and Teddy are kidnapped by a never-before-seen Amazonian tribe, the great hunters are asked one thing in exchange for their freedom: find and kill a beast that leaves no tracks and that no member of the tribe has ever seen. But what are the origins of this beast, and how do they escape its brutal wrath?

Roosevelt's Beast is a story of the impossible things that become possible when civilization is miles away, when the mind plays tricks on itself, and when old family secrets refuse to stay buried. With his characteristically rich storytelling and a touch of old-fashioned horror, the bestselling and critically acclaimed Louis Bayard turns the story of the well-known Roosevelt-Rondon expedition on its head and dares to ask: Are the beasts among us more frightening than the beasts within?

My Review: Listen to this:


After all these years, his best friend is malaria.
Even on the brink of an Alaska summer, it comes calling: a bone-deep chill one night, a ministry of sweat the next. Calling him back to old battles.

And we're off, down the River of Doubt with Kermit Roosevelt and his famous father (of whom Kermit's eldest half-sister, Alice, said, "Father wanted to be the bride at every wedding and the corpse at every funeral") and somebody scientific who, frankly, interested me not at all.

Kermit tells us about this factual trip in moderate detail, enough to make the facts of the journey come across as lived, not reported. That's a frequent issue I have with historical fiction, the author's telling of the tale sounds like a highly embellished report and not a novel. Enough is here to make the atmosphere come humidly to life; not so much as to feel ponderous. Here, like this, listen:


Here was the thing about traveling down an uncharted river: You could only say how long you'd been traveling; you could never say how long it would be.

It's the precise sort of thing I'd expect the clever son of an overwhelmingly larger-than-life father to say, to focus on distances and travels and quotidian concerns because his giant of a father (Roosevelt was maybe 5'8" in body but 12'12" in spirit) has sucked up the glory-hounding until he's simply got nothing else to think about.

And then on an overnight stop, Kermit and TR are kidnapped by a previously uncontacted native group (I do so loathe the locution "undiscovered tribe"—and who, might one inquire, determined that being contacted was being discovered, like their lives before Europeans showed up weren't real?). Their freedom can only be bought by ridding these people of their monster, a killer of Grendel-ish horrific-ness. Two days the men seek and revoltingly find the Beast's results, and only when they are living out a nightmare of misery and a cleansing, purifying agony of memory and rage do they really encounter the Beast...within, as always.

Both are shattered and neither is ever the same after this trip. (Factual again, after the invented Beast interlude.) Kermit succumbs slowly to the depression and addiction that killed his paternal uncle, and TR himself gives up, defeated for the only time in his life...and by himself, as in the end are we all. TR can't face the even the notion that anyone will ever so much as hear a whisper of his ordeal (oh, and Kermit's, but you know whose rep is foremost on TR's mind):


“You are asking us to lie, Colonel?"
"I am asking you to omit. Surely, amidst the...the infinite gradations of human venality, that particular sin ranks low." The old man kneaded the folds of his throat. "What happened out there belongs out there. The jungle has it; let the jungle keep it...”

A novel of fathers and sons, of myths and monsters, and of identity and fate. It's written in Bayard's accustomed voluptuous prose, and it's got the usual peaks and valley in plotting. I myownself wish that the Beast had been nailed down, shown to be either real or a projection of mass psychosis or a deeply experienced malaria dream. Nonetheless, I'm sure many will find this blurring of borders exactly to their taste, and even those among us for whom that's not the draw to the story needn't let it cause us too much pain. Simply decide for yourself what interpretation you want to put on it, and do so. Bayard's story will support it.

And that's about the best compliment I can give a writer, that one there.