THE DAY OF THE TRIFFIDS, apocalypse now all over again? 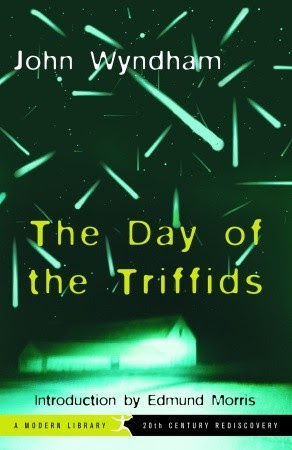 Rating: 4 worried, sky-searching stars of five, with a pair of dark goggles at the ready

The Publisher Says: In 1951 John Wyndham published his novel The Day of the Triffids to moderate acclaim. Fifty-two years later, this horrifying story is a science fiction classic, touted by The Times (London) as having “all the reality of a vividly realized nightmare.”

Bill Masen, bandages over his wounded eyes, misses the most spectacular meteorite shower England has ever seen. Removing his bandages the next morning, he finds masses of sightless people wandering the city. He soon meets Josella, another lucky person who has retained her sight, and together they leave the city, aware that the safe, familiar world they knew a mere twenty-four hours before is gone forever.

But to survive in this post-apocalyptic world, one must survive the Triffids, strange plants that years before began appearing all over the world. The Triffids can grow to over seven feet tall, pull their roots from the ground to walk, and kill a man with one quick lash of their poisonous stingers. With society in shambles, they are now poised to prey on humankind. Wyndham chillingly anticipates bio-warfare and mass destruction, fifty years before their realization, in this prescient account of Cold War paranoia.

It must be, I thought, one of the race's most persistent and comforting hallucinations to trust that "it can't happen here" -- that one's own time and place is beyond cataclysm.

In this time of fearful concern over genetically manipulated Frankenfoods, the triffids should give this book a fresh and timely aura, IMHO. For Soviet manipulation of plants, read Monsanto, and, well....

One of the big issues with the book is the Dreaded Infodump, pretty much all of chapter two. I know why folks don't like long expository passages, but there is always a certain amount of world-building to do in any novel, especially so in SF. So, in the end, I come down on the side of the flow NOT being interrupted by the backstory. I think it was well handled, well as well-handled as such a thing can be; Wyndham starts the chapter with "This is a personal record." That's the jumping-off place for the character's memories. That was, for me, an adequate narrative frame for the purpose of keeping the important sense of forward momentum present in the 18pp (in my Modern Library reprint) it takes to put readers in the picture.

I think I was lulled into acquiescence by Wyndham's style, as well: "Such a swerve of interest from swords to plowshares was undoubtedly a social improvement, but, at the same time, it was a mistake for the optimistic to claim it as showing a change in the human spirit." (p21, Mod. Lib. reprint) Understatedly gives the reader a sense of the narrator's already extant character and informs the retentive reader that later dark musings the narrator indulges in are not due to a freshly developed case of the post-apocalyptic blahs.

Then this chilling bit:


But there were a number of not unobvious characteristics which escaped comment for some little time. It was, for instance, quite a while before anyone drew attention to the uncanny accuracy with which {the triffids} aimed their stings, and that they almost invariably struck for the head. Nor did anyone at first take notice of their habit of lurking near their fallen victims. The reason for that became clear only when it was shown that they fed upon flesh as well as insects. The stinging tendril did not have the muscular power to tear firm flesh, but it had strength enough to pull shreds from a decomposing body and lift them to the cup on its stem.

But how much more effective and chilling and revolting and scary when delivered in the even, measured voice of a scientist-cum-post-traumatic-stress-survivor instead of screeched at us. The narrator's reliability is well established with the reader at this point, and later horrors are subtly magnified by the unconscious impression of trustworthiness this kind of technique provides.

REAL horror, not gore: that sense of unspeakable and terrifying things happening on a Wednesday afternoon at four pm, not in some horrible abbatoir at midnight where I the reader/moviegoer know for sure and certain there are not enough wild horses to drag me.