LONELYHEARTS, a dual bio of a Depression-era golden couple 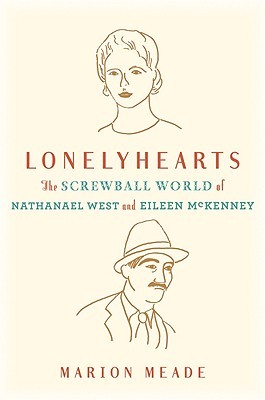 Rating: Reviewing this book, I am more grateful than ever to the innovator who thought up the decimal-star system. No way could I rate this four stars, and three-and-a-half is a little mingy, so I really give it 3.8 stars.

The Publisher Says: NATHANAEL WEST—novelist, screenwriter, playwright, devoted outdoorsman—was one of the most gifted and original writers of his generation, a comic artist whose insight into the brutalities of modern life proved prophetic. He is famous for two masterpieces, Miss Lonelyhearts (1933) and The Day of the Locust (1939). Seventy years later, The Day of the Locust remains the most penetrating novel ever written about Hollywood.

EILEEN MCKENNEY—accidental muse, literary heroine—was the inspiration for her sister Ruth’s humorous stories, My Sister Eileen, which led to stage, film, and television adaptations, including Leonard Bernstein’s 1953 musical Wonderful Town. She grew up in Cleveland and moved to Manhattan at 21 in search of romance and adventure. She and her sister lived in a basement apartment in the Village with a street-level window into which men frequently peered.

Husband and wife were intimate with F. Scott Fitzgerald, Dorothy Parker, Katharine White, S.J. Perelman, Bennett Cerf, and many of the literary, theatrical, and movie notables of their era. With Lonelyhearts, biographer Marion Meade, whose Bobbed Hair and Bathtub Gin earned accolades from the Washington Post Book World ("Wonderful") to the San Francisco Chronicle ("Like looking at a photo album while listening to a witty insider reminisce about the images"), restores West and McKenney to their rightful places in the rich cultural tapestry of interwar America.

My Review: It's a good story...hot young honey who's famous for being famous marries screwed-up weirdo writer of unsalable novels, they end up dead. Kinda like the Joe Orton story, only no one here's a real man.

Nathanael West comes out worst in this dual bio. He sounds like a self-loathing closet queer and anti-Semitic Jew, with a talent for cruelty and impeccable, phony manners. (Sure could write, though.) Eileen McKenney sounds like someone we all know today, the fifteen-minutes' wonder...Joe the Plumber, Sarah Palin...who would've spent the rest of her life trying to cash in on her fleeting moment of celebrity.

Dreadful people, actually, ones I'd pay not to know, and I am double glad that I didn't buy this book. Meade does a solid job reporting the facts, and even goes so far as to avoid calling West a closet case...but really, ma'am, you reported that the trog had gonorrhea of the ANUS, now does that not suggest something to you? Google the phrase "lucky Pierre" and stand back.

One of the bitterest ironies of the whole book is that Eileen's sister Ruth, the author of My Sister Eileen, became a very wealthy woman starting four days after Eileen's death...the Broadway show "My Sister Eileen" was a huge, huge hit, and spawned numerous revivals and reworkings, supporting its author all the rest of her life. I wonder if she'd've shared the gelt with Eileen. We'll never know, of course, but I suspect not. Ruth is not a likable character at all, per Meade, inclined to manic depressive episodes and a Communist True Believer (how tedious).

So why rate the book so highly? Because...these are REAL people, not airbrushed whitewashed celebrified people. They come across as, well, fascinating in their very, very, very flawed selves. Meade's made some dim corners of American celebrity life quite a lot brighter, and I suspect the likes of Kato Kaelin are busily dusting the corners of their lives.

I don't think I'll recommend this book to anyone not fascinated by Nathanael West. Really, it's just too far to go for someone just browsing around, and probably too tedious for anyone not already familiar with the time-period (1900-1940) in BOTH New York and Hollywood.