DOGFIGHTERS by Alex Beecroft, UNDER THE HILL #2 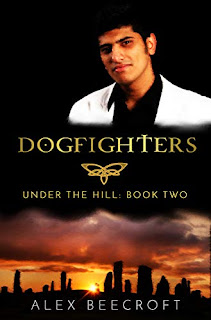 The Publisher Says: Kidnapped by the Faerie Queen, Ben is confronted with his own supernatural heritage, a royal family and a lover he doesn’t remember. His first instinct is to turn his back on them all and get back to Earth. Compared to this, Chris and his wacky cohorts seem almost…normal.

Back on Earth, Chris Gatrell is having trouble convincing the police that he didn’t do away with Ben and hide the body. Determined not to lose another sweetheart to the elves’ treachery, he presses his motley crew of ghost hunters to steal a Mosquito bomber…and prays the ghosts of his WWII crew will carry them through the portal to Ben’s rescue.

Meanwhile, Chris’s elf-trapped WWII love, Geoff, has a dragon and he’s not afraid to use it. If only he could be entirely sure which of the elf queens is the real enemy—the one whose army is poised to take back planet Earth for elf-kind.

In the cataclysmic battle to come, more than one lover—human and elf alike—may be forced to make the ultimate sacrifice.

My Review: Well. That was fun.

This being the second of two parts, and part one ending on what can only be described as a coitus interruptus-level cliffhanger, it's a darn good thing for my sanity and the health of those around me that this volume was already teed up on the Kindle.

Only Mrs. Beecroft could keep me up all night reading two back-to-back (!) romantic stories about faeries and dragons and Lancaster bombers and pretty, pretty mens NOT having hot monkey sex despite wanting to.

Some things jarred me, though, and I re-read the book to see what they were, before I wrote this review. No, no, you of little faith, it wasn't the lack of hot monkey sex (well, yes it was but I'm not admitting it publically), it was...well...it was the fact that this story needed more.

Fast-drawn lines and suggested histories are fine in shorter works. One expects them. This read, in aggregate tree book form, probably takes 400 or so pages to tell. Make it six hundred, don't break it into two bits, and give me more!

I hear crickets. It's not that amazing, really, when you think about it. I'm always grousing and moaning about the fact that the bajillion-page nonillionologies are fatty, padded, poofy-marshmallow-dipped-in-saccharine idealess attempts to empty the wallets of the bored. And here's a book whose two worlds, well three really, could profitably be expanded to make them intersect more satisfyingly with the sweet guys who populate Beecroftite tales. Love, the falling-in kind as well as the milder, friendlier kind, is at the heart of any story Beecroftly. But the background story has such a huge impact on the tale of love she spins here that it really needed to be fuller, though not richer.

So here I am plunking a mean-spirited 3.5 stars on what should have been a five-star read. The ending, which I won't spoiler, is the main reason I got over three stars. I cried soft, sentimental tears, sniffing into my hanky, as the ending played out. Oh goodness I am a sappy old queen some days. I even called the now-former gentleman caller and we had a good mutual sniveling about the ending. (To his current man's vocal annoyance, which I confess gave me a most unworthy stab of satisfaction...guy doesn't read, and you're gonna leave me for him? Fool.)

So, well, I'm certainly not yodeling rapturously from the housetops, but I would very much suggest the squeamish "ewww-ick" homophobics who have a weakness for knight-errantry, dragons, and the warm, healing glow of love rewarded by love.
Posted by Richard at 7:00 AM