I, THE SONG is 4 stars good and will teach important lessons 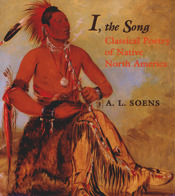 The Publisher Says: I, the Song is an introduction to the rich and complex classical North American poetry that grew out of and reflects Indian life before the European invasion. No generalization can hold true for all the classical poems of North American Indians. They spring from thirty thousand years of experience, five hundred languages and dialects, and ten linguistic groups and general cultures. But the poems from these different cultures and languages belong to poetry unified by similar experiences and shared continent.

Built on early transcriptions of Native American “songs” and arranged by subject, these poems are informed by additional context that enables readers to appreciate more fully their imagery, their cultural basis, and the moment that produced them. They let us look at our continent through the eyes of a wide range of people: poets, hunters, farmers, holy men and women, and children. This poetry achieved its vividness, clarity, and intense emotional powers partly because the singers made their poems for active use as well as beauty, and also because they made them for singing or chanting rather than isolated reading.

Most striking, classical North American Indian poetry brings us flashes of timeless vision and absolute perception: a gull’s wing red over the dawn; snow-capped peaks in the moonlight; a death song. Flowing beneath them is a powerful current: the urge to achieve a selfless attention to the universe and a determination to see and delight in the universe on its own terms.

My Review: That this book exists at all is damned near miraculous, considering the holocaust brought to this continent by European diseases; the racist contempt of European settlers for the "savages" they found here after Columbus "discovered" the Caribbean; and the sheer magnitude of a task such as this, listening and writing and listening and questioning and listening and revising all the writing already done. Field anthropology, though that term is far from the concepts in thinking of the era in which most of these poem/songs were collected (eighteenth and nineteenth centuries), is damned good and hard. Adapting yourself to the rhythm of an alien society, learning the place of each person, identifying multiple sources of information, earning their trust; never-ending tasks that, with a single careless comment or a mistranslated word, can have dire consequences for broken trust.

As one would expect in an academic press's book, the poems/songs preserved and translated here for modern urbanites to enjoy are thoroughly organized, the organization is completely intuitive and easy to use, and the material translated is fascinating. Unlike many an academic book, I, THE SONG is also very beautiful. Many of us are familiar with artist George Catlin's many paintings and drawings of the even-then vanishing Native American material culture and people. His painting, Double Walker, a Brave, dated 1832, is the cover image of the book. It is a magnificent painting of a magnificently attired man smoking a beautiful decorated pipe. It is also such an astonishingly present image that I expected to smell the pipe smoke and hear Double Walker speak. It is a perfect cover image because it sets the entire tone of the volume. This is no ordinary, familiar poetry in a moderately pretty package. This is a rare and privileged view into the minds and hearts of peoples either dead and gone, extinct from the earth, or so marginalized by the modern world as to be invisible unless one is looking for them.

In this shaman's song, song and singer merge. The song, visible in the singer's breath on chilly mornings or after ceremonially smoking, wears the breath and the singer. Sometimes, song, singer, and the Holy Person who gave the vision, and the song that sprang from the vision merge. Walking about, the shaman becomes the song.

From these very first words, the tone of the explanatory text is set. The spiritual beliefs are presented in real time, that is as facts of life, simply unquestioned reality. The song, this song, can morph as the shaman receives new visions: dogs, gods, warriors, anything the Holy Person sends into the shaman's mind. It's a different relationship to the universe than that of modern Western culture. If for no other reason, that is a reason to spend a very reasonable $19.95 on a pretty book. It will look both beautiful and hoity-toity on your coffee table. It will give people an accurate index of your intellect without your needing to say a word.

How many books can claim all that?
Posted by Richard at 6:30 AM