MURDER IN THE RUE CHARTRES by Greg Herren, third entry in the Chanse MacLeod mystery series 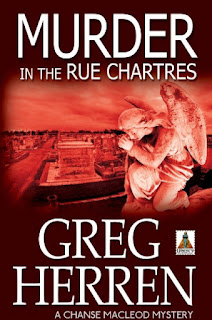 In the wake of Hurricane Katrina, Chanse MacLeod returns to a different, shattered New Orleans in an attempt to rebuild his own life and face his own future. When he discovers that his last client before the storm was murdered the very night she hired him to find her long-missing father, he is drawn into a web of intrigue and evil that surrounds the Verlaine family.

My Review: There is no escape from the past. It supports us, if we're lucky; it drags us down from otherwise attainable heights, if we're not. This third installment of Herren's Chanse MacLeod mysteries reinforces this sad, inescapable lesson in a harsh and cruel and painful way, only for once it's not Chanse that does most of the suffering. Hired to look into a 32-year-old disappearance by the daughter of a vanished father, Chanse ends up fired before he can so much as cash the check...and then his client turns up dead. Odd, that...and her in the throes of planning her wedding? Something smells fishy to Chanse, who returns her retainer check in person to the dead woman's older brother. Surprise there: Chanse now has a much larger retainer check and a new client who wants the same job done. In short order, Chanse meets the patriarch of this singularly unlucky clan; loses his new client to what he is morally sure is murder; breaks up with his rebound guy, a nice-but... that he met in the last book; has a quickie with an old friend, newly single; and learns that his hag/best friend is leaving post-Katrina New Orleans. To finish her book, she says.

Rest assured, though: The right people end up in the right places and Chanse, for a wonder, actually unthaws his cryogenically preserved, battered, bruised, and broken heart, resolving to live his life and not simply exist in it because he's not dead yet.

New Orleans post-Katrina is a grim backdrop for this outing. I suspect in many ways anyone who has written about New Orleans since 2005 has written out of a sense of atonement, or expiation, or making things right, because after all they're alive and so very many aren't any more. Chanse comes home from a stay in Dallas to find that he's lost nothing in the storm or the flood; his friend Venus lost everything, for example, as did so many. The hero of a mystery series needs obstacles to make him more interesting that simply a crime-solving computer. The obstacles here, well, they're pretty grisly...driving around and seeing those horrible, horrible "X"s showing where bodies were found...refrigerators abandoned as far from homes as possible so they won't add to the mold problems, and adorned with anti-government slogans...well, this leads Chanse to a minor breakdown. No duh.

I am not, at heart, a New Orleanian. I got out of the car in 1975 and said, "Jesus, what a dump." Nothing in all the time since has made me think anything different. I don't miss going there, and wish our friends from there would come here to visit. But the city is one of the world's most popular destinations, and it's got a certain raffish charm that shines through in these books. I still don't want to go there. But I like the Chanse MacLeod character's development and growth, and I like the secondary characters like Paige, his hag, and Venus, the tall and elegant lady detective; who knows, maybe Herren has let us see a glimmer of hope for Chanse to have a shot at boyfriendly bliss!

Kinda doubt it, though. Remember what happened to "Moonlighting" when Cybill Shepard and Bruce Willis finally got it on?
Posted by Richard at 6:30 AM