THE GOOD DIVIDE by Kali VanBaale...you CAN choose your family...but what then? 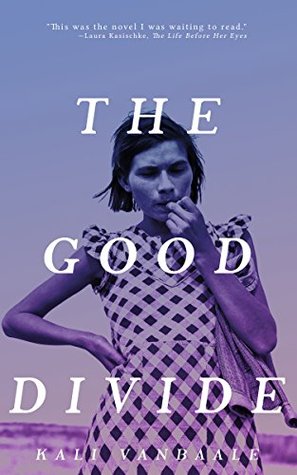 The Publisher Says: In the lush countryside of Wisconsin, Jean Krenshaw is the ideal 1960's dairy farm wife. She cooks, sews, raises children, and plans an annual July 4th party for friends and neighbors. But when her brother-in-law Tommy, who lives next door, marries leery newcomer Liz, Jean is forced to confront a ten-year-old family secret involving the unresolved death of a young woman.

With stark and swift prose, VanBaale's second novel, The Good Divide, explores one woman's tortured inner world, and the painful choices that have divided her life, both past and present, forever.

My Review: I asked Midwestern Gothic Press for a review copy of this novel, and they obliged me with a .mobi file which I read with the kind of focus others give sacred texts.

I was heartbroken at least a half dozen times, furious almost all the time, and ended the read with a gusty sigh for the many, many ways people hurt themselves and each other in the service of love. The book's main point...that it is the Marthas of the world that suffer for their love, silently and passionately...is one I've got a very soft spot for. Women who give their all, receive little in return, and internalize their pain as completely as they can in order to get up the next morning and do it all again, are far more numerous than men or even their flashier sisters want to acknowledge.

The words on the "page" of this book (remembering I read it on a Kindle) are much like Jean herself is, simply presented and unassumingly powerful. The joys of life on a farm aren't very alluring to our many and various urbanite communities (despite the astounding number of books published by self-exiled urbanites; if it was a common thing, there wouldn't be a market for the tales, right?), since they involve very very hard physical labor and a non-stop calendar of battles against entropy. Some are won, the calf is born and the heifer gets right up to suckle it; some are lost, buildings and lives rot as they're used and used and used but can't be unused long enough to tend to their needs. In Jean's life she has lost a lot, beginning with her mother's early death, proceeding to a miserable life with her drunken grieving father, and then to the hard life of living within sight of a prize you can never, ever have. The episode with the pearls...well, if you can read that and not suffer for Jean, I don't want to know you.

It seemed to me that Jean said "I couldn't" and "I can't" a lot. That was in keeping with her character, but made me want to scream "but you already ARE and you always have been DOING IT ALL!" In the search we all live from day to day, that blind rooting around for kernels of sustenance for our deepest desires and hopes, Jean finds nothing that she doesn't immediately give to someone else. Her strength is astounding. The people she supports are, I suppose, worthy of her effort. I can't be fully sure, because we only see out of Jean's eyes and she's already decided they're worthy. I wonder if I'd like any of these folks in the flesh.

If I'm not being clear, I thought this was a wonderful book and a delightfully engrossing read. It had one or two nits I'd pick (eg, the beehive was invented in 1960 so no one would've worn one in 1952; Music Man debuted in 1957, so couldn't have been the play put on in 1952, either), but they're nits. I would strongly recommend investing your eyeblinks in this feminized modern Ethan Frome-ish novel. I am very glad that I did, and I'm a tough sell.
Posted by Richard at 6:30 AM