TRAIN TO POKIPSE, the last book midwifed by the legendary Barney Rosset 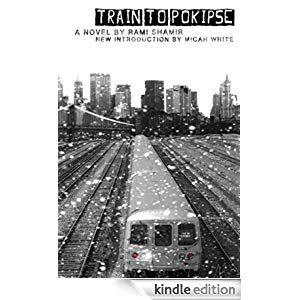 The Publisher Says: Set in New York during the George W. Bush years, TRAIN TO POKIPSE has become an underground critical sensation since it was first published in a limited, highly sought-after edition in 2012. The last book to be edited and championed by famed publisher Barney Rosset, POKIPSE bookends a literary canon of twentieth century masters that includes Samuel Beckett, Henry Miller, and William S. Burroughs. Including a beautiful new introduction from Occupy Wall Street co-creator Micah White, TRAIN TO POKIPSE is finally available to a mass audience in this first-ever digital edition. White, who was named one of Esquire Magazine's most impacting millennials, reasserts TRAIN TO POKIPSE's standing as the the millennial generation's foremost literary work: "The novel you are about to read is a timeless chronicle of the psychological origins—the collective mood and affect—that catalyzed Occupy Wall Street... TRAIN TO POKIPSE deftly captures the essence of what compelled the millennial generation of cognitariat youth, over-educated and burdened with student debt, to suddenly throw aside ironic nihilism and rise up in an earnest spiritual insurrection."

My Review: Rami knows me from Twitter, where we both follow "Barney's Wall," a tribute account to publishing legend Barney Rosset. I got a Kindle copy of the book after we had discussed it for a while; I wasn't sure what I'd find, but had confidence in Barney's taste. It was not misplaced.

I was in Manhattan's downtown scene in the 80s and 90s, and had a blast. That's all I'm going to say in public. I recognized the life that our main character is living as my own attempt to run away from crippling depression and the wretched misery of anxiety that I never knew was there. I figured that was how everyone felt; none of us talked about it because, well, why?

Like Rami's creation, I also had relationships that rotted away from under me; I didn't think it was my fault, of course, but hey presto! comes the dawn and my self-sabotage smacked me in the teeth. Unlike the main character in Rami's novel, I waited until I was 54 to crack under the strain of coping and then spent four and a half months in the bin. I have to wonder, having read this novel, if I wouldn't have done better to have cracked thirty years earlier...but anyway, all of which is to say I relate. I relate to this little pisher's adolescent posturing, angst, escapism, lust...it's all part of me as much as it's part of the narrator.

That's a fine feat of writing, ladies and gents. A man closer to sixty than to forty reads himself into a book written by someone younger than his own child? Impressive prose-making. It's a wonderful feeling to see the art of storytelling safe in the hands of the millennials, even the dangerous high-wire balancing act of non-linear narrative is alive and well. It's there, however, that I grade Rami down a bit.

Non-linear narrative in TRAIN TO POKIPSE, with its time-shifts and varying ages of one narrator, requires something to knit it together. That something is up to the author; Rami chose a big risky knitting yarn in using the cocaine habit. It isn't entirely successful because unless one's been there it's simply repetitive unrelatable woollyness. Coke makes you feel sharp and masterful; then you crash into a vat of lint. (So I'm told.) (It says here.) That's fine for a shortish stint in a novel, but grows dull. What he has written here is faithful to the experience, no argument. But the dullness of the experience is in its many pleasures vanishing in that vat of lint.

But let's not forget that it takes big people to make big mistakes, and that this is a first novel. Rami Shamir. Learn his name, because you'll be hearing it again. And again. Thank the good Muses for that!