BOMBER'S MOON: Under the Hill #1 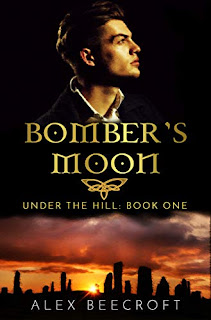 The Publisher Says:The faeries at the bottom of the garden are coming back—with an army.

Under the Hill, Part 1

Ben is a modern, sceptical man but the fairies are trying to abduct him. When he hires Chris's paranormal defence agency to protect him, he doesn't expect to fall in love.

Chris is a refugee from his own time. He's lost one lover to the elves already. Terrified, but determined that this time he'll do better, he promises Ben that the elves will get him over his dead body.

If only that wasn't looking so likely.

Under The Hill was voted Best Multicultural Fantasy 2013 in the M/M romance Swirl Awards. Bomber's Moon is the first book of the complete story. If you love KJ Charles' Green Men and Magpie Lord books, you'll love this.

My Review: Exactly and precisely as the book description says it is. Now, anyone who has ever interacted with me knows I'm no fan of fantasy, but there is nothing on earth more useless than a hermetically sealed mind so I tried this out. Fantasy plus men having sex with each other *must* be better than the straight kind.

But there isn't any serious sex in here, so get a big ol' two-fisted grip! One little scene, nothing even close to explicit. The point of this novel isn't the zeal of the organs for each other, it's the Hero's Journey. And the Hero has a wonderful journey, from WWII to 1995 in a blink, then living through the birth of our 21st-century world, and meeting someone whose own Hero's Journey is crossgrained to his own. Ben is Indian, living in Bakewell, and working in a bank; Chris is as English as spotted dick, living in Bakewell, and fighting the forces of supernatural invasion as he once fought the Luftwaffe. They aren't instantly obviously going to fit together. And that's the fun, romantic part of the story.

But then there's the fantasy bit, complete with German fairies invading and occupying English Elven territory; an ancient prophecy that demands an English bomber crew be brought to the other world; an air force of modern fighters in the elven lands, ready to rain destruction on...well, anyone; and a princess hostage damsel in distress to satisfy the conventions, one whose seductiveness can straighten the crooked path of a lost navigator.

I've read Beecroft's Hearts-of-Oaky smexy romances, and so I knew what to expect from the prose. It's direct, it's unfussy, and it's effective. (It also needs copyediting, but that's not Beecroft's fault, it's Samhain's...I mean, calling someone "died-in-the-wool"? It's DYED and that should have knocked the publisher's eye out!) I had sort-of hoped for the Age of Sail's smut content, since I like that kind of thing, but was steeled for the mildness of the entry by previous reviews.

The issues for me, apart from the copyediting, were focused around the hanging-together-ness of the plot's big points. Why, I wondered, does it not occur to modern-day Ben (20s) to ask why Chris (late 30s) is SO old-fashioned? It's right completely out of the modern day, the way Chris behaves towards Ben, even after Chris comes out to him. How has Chris managed to live almost 20 years in the modern era and not had more of it rub off on him? How on earth does he live, I mean money-wise? They're niggles. But they're niggles about big points.

But, and this is why I rated this book at least a full star above any other with issues that size, this is a thumping good read, with lots of very interesting urban-fantasy takes on old fantasy tropes, and characters whose happiness I actually care about. Yes, yes, teenaged girls are people too, but I don't care about their Special Uniqueness and Awesome Powers even a little bit. I do care about Ben's. And Chris's. And I want them to have a happily ever after.

Because they're man-lovin' men. For once someone is talking to ME. And I like it. Thanks, Mrs. Beecroft, for doing your usual solid job of entertaining me.
Posted by Richard at 6:30 AM