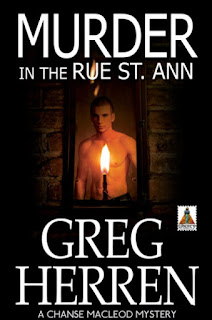 The Publisher Says: When sexy gay private eye Chanse MacLeod investigates the financial shenanigans of club promoter Mark Williams, he discovers that not only does Williams have ties to the New Orleans judiciary, he also has ties to Chanse’s lover, Paul—a connection that reveals secrets about Paul’s past that Chanse had never guessed and now wishes he didn’t know. When Paul disappears, it seems his past has caught up with him in a terrifying way.

My Review: Second of the Chanse MacLeod murder mysteries set in New Orleans, this is a more assured performance by author Herren. He winds a good tale around the sudden end of happiness for our tight-lipped hero...boyfriend Paul goes, in the space of twenty-four *really* lousy hours, from apple dumpling sweetie pie to murder suspect to missing person. Chanse reveals more to us in the course of his frantic search for Paul, and along the way steps in the dogshit-laden middle of a Federal Mob case, almost becomes a wrestle-porn whore, and winds up with a tender and loving experience of family and love and acceptance. As his entire world ends. Ain't it always the way?

*SPOILERS FROM HERE ON*
*
*
I don't know if I've told my grim secrets often enough for them to be scabbed over or not, but this book ripped them scabs right off. Chanse's trailer-trash past is detailed here, and while the setting of his agonies was way way down-market from mine and my mother was the abuser not my father, we came from similar backgrounds of unknowable trigger-points for screaming violent abuse. It was harrowing to read. (Sucked to live, too.)

Then, after a very unpleasant break-up, we see Chanse's self-involvement and inability to love and care in a real and significant way for others: Check! Did that. I hid it behind being an AIDS volunteer, and put a braver face on it for the public, but oh yeah. Ask any of the women I married. Ask the men I dated. I promise they'd back me up here: Cold as a walk-in freezer when it came down to it.

And then, and then...oh my oh my...Chanse loses Paul to a vile and horrible crime, as I lost my son to his mother's drunk driving in 1981, as I lost my dearly, dearly treasured Bland to AIDS in 1992. Herren gives his reactions to the horror in a direct and laconic way, which makes them all the more affecting. Those of us only slightly and tangentially able to feel emotions anyway respond to grief in a particular way...all the color goes out of the world. There may be a storm of weeping, then *slam* the gate goes down. No more tears. And then the torment begins: You are made of lead, of iron-bound lead, and the world is papier mache. Moving is a delicate task. Nothing at all works. Drinking and drugging suddenly seem like *wonderful* ideas, so off you go!

And that, my friends, is where Herren leaves Chanse--at a bar, drink in front of him, at 11:45am.

Oh yeah. Been there, done that, and so (I suspect) has Herren. I don't think a person can make this imaginitive leap without a real solid launching pad. I hurt for him, no one should have to know what it's like. But then, isn't that what art does? Take the fortunate to the places the unfortunate know how to find? Well, whatever the source, the book takes the reader there, that awful agonized place of loss.

But then you get to close the book, put it on a shelf, and get a glass of water for your nightstand as you go to bed.

Sweet dreams.
Posted by Richard at 6:30 AM