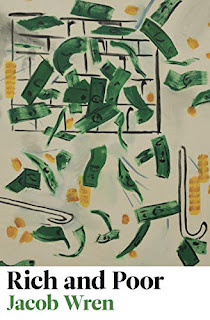 The Publisher Says: Who hasn't, at one time or another, considered killing a billionaire?

Following on the critical success of his novel Polyamorous Love Song (BookThug, 2014; finalist for the Fence Modern Prize in Prose and one of The Globe and Mail's 100 best books of 2014), Canadian writer and performer Jacob Wren picks up the mantle of the politically and economically disenfranchised in Rich and Poor--the story of a middle-class, immigrant pianist who has fallen on hard times, and now finds himself washing dishes to make ends meet.

Wren capably balances personal reflections with real-time political events, as his protagonist awakens to the possibility of a solution to his troubles and begins to formulate a plan of attack, in which the only answer is to get rid of "the 1%."

Rich and Poor is rare work of literary fiction that cuts into the psychology of politics in ways that are off-kilter, unexpected, and unnerving. In drawing comparisons to fiction that focuses on "the personal as political" (including Chris Kraus's Summer of Hate and Roberto Bolaño's The Savage Detectives), Rich and Poor is a compelling, fast-paced, and energizing read for adventure-seeking, politically active and/or interested readers who rowdily question their position among "the 99%."

My Review: Since I'm perfectly in sympathy with this book's political stance, I'll start my delighted review with the mission statement of the wannabe killer of a billionaire, whose only name throughout the book is "2":


On a social level, people have to look after each other, but on an ethical level, each of us has to look after ourselves. If you are a billionaire it is because you have done evil in the world. You have exploited and caused untold misery. You have bent laws and governments to your will. I don't want to shoot him. I want to strangle him with piano wire. I don't want to escape. I want to be caught and explain my idea to the world. I want to be executed. I now have nothing to lose. We will all be forgotten. But if ten of us manage to kill billionaires those ten will be remembered forever. Our poverty will become history. Wealth is impersonal but we will make it personal again.

It's the voice of a desperately radicalized man, fallen from the heights of lauded piano virtuoso to the depths of restaurant dishwasher, an under-the-table cash job. He's used this void-of-brain-stimulation time to meditate upon the class system, the wealth gap between rich and poor, and what he can do to redress the imbalance that we all see every day. He elects to kill a famous, or infamous depending on your politics and economics, billionaire. It will be his life's purpose. Lucky for him he has nothing else to occupy his mind.

And the billionaire, called throughout the book by the simple numeral "1," he has a tale to tell as well. His ruminations on himself, his position in society and the economic nature of the society we've built, are fascinating:


Capitalism is not the simple desire to make a profit. Capitalism is the fantasy that growth can continue at a consistent rate indefinitely. When a child is young, it cannot yet imagine being an adult, so it thinks it will keep on growing forever. The fantasy that you can grow forever is exhilarating, one of the many aspects that make children seem so alive. We live in fantasy, all of us, all of the time, to a greater or lesser extent.

So it's clear that, unlike the expected attitude of blind entitlement, 1 is a clear-sighted and fundamentally honest observer of the world. He recognizes the Ponzi scheme that is the Growth Myth. It makes 2's desire to kill him a little more problematic from the get-go. 2 doesn't know 1, and I couldn't help wondering what would happen when they necessarily met each other. Would the murder plot get sent to File 13?

Certainly that isn't 1's focus. I don't see any evidence that 1 recognizes that 2 is a real human being, just a meat puppet standing in for all of Them:


I don't really have any positive vision of the future, don't know what kind of world I'd someday like to live in or if it's even possible to achieve something better than this. I only know that the billionaires are attacking us, again and again taking measures that serve no other purpose than to increase their own wealth and debase all other aspects of life. And when you are attacked you must fight back, in whatever way you can.

No vision of a better world? No sense that bettering the place he lives will result from killing the Evil Billionaire? I began to feel my empathy for 2 drop, having started out quite high. I can't see killing for the sake of sending a message as a justifiable motive. Taking a human life is a very serious step. In service of a better world coming into being, within a purposeful plan of larger action, okay. Maybe okay. A little bit less heinous a crime.

The next thing I know, nasty evil billionaire 1 is yet more humanized by his ruminations on the nature of friendship, in the context of losing his one and only, therefore best, friend in a corporate war:


Friendship is a strange idea, difficult to quantify and, at times, even more difficult to maintain. Clearly a friend is someone you enjoy spending time with. However, a friend is also someone you continue to support even during periods when they are considerably less pleasurable to be around. The loyalty of friendship often contains a kind of tautology or feedback loop: the longer you are friends the more loyal you become, and the more loyal you become the longer you remain friends.

A man who has hung his best friend out to dry has the gall to think he understands friendship, let alone loyalty. We're seeing only what the characters show us, naturally, but this seems a bit rich from someone who was beginning to feel more self-aware and human than his would-be killer.

While 2 is seeking ways to get closer to 1, close enough to do him in, he runs into obstacles but also has a stroke of amazing luck: He meets 1's erstwhile best friend, Emmett, a virtuoso of the corporate battlefield who has neutralized many a threat for 1 before everything went south. All 2 has to do upon meeting Emmett is offer a willing ear for his troubles:

And back to 2 being the better man, since 1 could so abuse his best friend Emmett as to cause him to feel this caustic outraged rejection. The fact that 1 did this amid a perfect storm of business disasters that Emmett was instrumental in guiding their business through makes 1's callousness more terrible, and to Emmett more painful. I can certainly see why. But the saying "all's fair in love and war" has endured for a reason. Like a game of chess, people are pieces to be sacrificed in pursuit of the goal of the moment, at least for poorer players. A longer term vision might not have allowed 1 to cast aside a loyal friend; or perhaps not. No way to know.

But what I love most about this book is that I wondered about such things. I was fully involved in the characters' inner lives as they were revealed to me. Their thoughts and actions came to seem so real, so fully realized were their internal struggles and inconsistencies, that I was completely absorbed in the story from beginning to end. It's a wonderful feeling to get that pulled in by a novel. The author's axe was indeed being loudly ground. That didn't prevent him from making both characters very sympathetic, each in his own way. One man who has nothing left to lose decides to kill another man who fears he is losing the capacity to shock and awe friend and foe alike. His reaction to the attempt by 2 to murder him is extremely telling:


I want to give a name to my would-be killer. What should I call him? Something that will ease his presence in my mind, make him look foolish, like he is of no threat and never was, which is in fact the truth. I don't want his real name, which is meaningless to me, but instead something I control, something I own, some way to own that piano-idiot who attacked me.

That's pretty clear. "I must control and own my surroundings" isn't a thought that occurs to a man who, simply by virtue of being in a place in company, just does own it. This side of 1 is a bit sad. He's not the lion he was, he sees the end of his life's work and his life for the first time:


I go to the shelf and pick out a few poetry books to take with me. A few old favorites and a few I haven't gotten to yet. As I slip the books into my carry-on, it occurs to me that there really are a lot of poems about death, that I've always read many poems about dying, but had almost never noticed them before. They were always the ones I lightly skimmed, and I thought that maybe I could start reading these poems more carefully. It was almost nothing, but it was also a decision about my life.

Sic transit gloria mundi. His will can't help but fail soon. That dreaded pasture is ever closer.

But 2, after his failed attempt at murder, is hustled out of the city where both men live since 1 doesn't want any kind of public noise made about the bungled attempt. He travels, all unconscious, back to the land he came from, where illegal migrant workers make cheap food possible for the hungry rich to eat. He's revealing to the reader how far he's come but how deep his roots are in that soil. He begins to play piano again as he tries to think through a plan of action to help the migrants, his original people, be treated fairly by management. The tunes he plays aren't the fancy classical things that brought him fame once, but the humble folk songs he grew up hearing.

In the end, 1 and 2 face off, thanks to the somewhat grudging help of Emmett, across a field of farm laborers who are committed to winning a union for themselves. It is 2 who worries about what the future holds, since 1 is lost to thoughts of something he won't see:


If we make a union in these fields, is there anything we can do to ensure it doesn't become corrupt? Or that later it doesn't only look after the people who work here, we just look after our own, and everyone else can fend for themselves? We need to fight for ourselves, here and now, but we also need changes so large and impossible they encompass the entire world.

Though he has lost the will to see into the future, 1 isn't lying to himself. He's still very clear-sighted and unafraid to look in the mirror:


What are the clichés that accurately reflect me, that me and my class of assholes seem to say over and over again, like super-elite broken records. That the poor are lazy, that we work harder than everyone else and deserve every penny we make (in my particular case, this happens to be true), that we are the global class and therefore effortlessly, with great skill and determination, run the world.

Yes, it's a cliché; but as 1 admits, it does describe himself and his people with fairness and accuracy. There's always a reason clichés become clichés.

After 180pp spent in the company of two broken, flawed men, I emerged from my reading feeling pretty darn good about myself and my situation. And nobody rock my boat! Swimming in Denial isn't something I want to do.
Posted by Richard at 6:30 AM