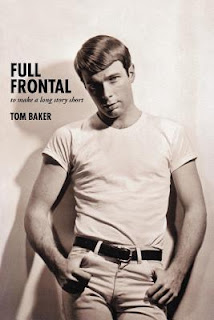 The (Self-)Publisher Says: It is August of 1957, and Tim Halladay, a caddie at the Long Shore Country Club, is looking forward to beginning eighth grade at Assumption School. Tim and his best friend and fellow caddie, Jimmy, are oblivious to the fact that they are slowly transforming into young men with secret desires.

As Tim embarks on a journey of emotional and sexual development, he approaches the world around him with a "full frontal" attitude that allows him to somehow not only survive but thrive, beginning with his first gay experiences as a shy teenager in suburban Connecticut and moving through his escapades at a Virginia army base, the Hotel Manhattan, the Museum of Modern Art, the Polo Lounge at the Beverly Hills Hotel, and lavish suites at various upscale hotels and resorts. As Tim moves from one encounter to the next, he gradually transforms, moving toward a future as a rising star.

Full Frontal shares an intriguing glimpse into the life of a gay man, as told through his eclectic relationships as he eventually discovers that true happiness is all about give and take.

My Review: What happens when history isn't recorded by Official Sources? When the world as it is gets painted and groomed and tarted up for Posterity? Go look in a history book, that's what happens. No juice, no life-as-it's-lived-ness remains, just a skeleton of facts and some fatty tissue about the one-percenters' public actions.

In recent years, historians have discovered the joys of nosing into the private lives of ordinary people via their diaries and their letters. Jeb and Dash, a non-fiction work about two gay men who lived, loved, and larked about between the World Wars, is a fun and interesting look at life otherwise unrecorded and unseen by History-with-a-capital-H.

Then there are books like Full Frontal. Short stories, fictions, that read like entries in your gay uncle's diary, and give you the naughty-naughty sensation of finding the book and sneaking a read of it before he gets home.

The ordinary life of an ordinary young man, coming of age and coming into himself, is usually the stuff of nightmares to read, listen to, or watch. We've all come of age, well most of us have, and we've all had our issues large or small with crafting an identity to suit our sense of self and place in the world.

Here, in these stories, Tom Baker brings a character into focus, sometimes sharp and others soft, whose ordinary lived life as a gay man of the Stonewall generation is vanishing from the earth. This subject isn't utterly fresh and new, goodness knows, since there have been about a Roman Legion of gay-male writers mining the shaft (in joke, don't fuss if you don't get it) in the past 40 years. What makes this book different, and altogether more satisfying on one level, is the absence of angst in the tale.

Tim Halladay was born gay, came of age finding and spending time with other boys who wanted what he wanted, and there's an end to that drama. He's a bit shy, a little bit awkward physically, and pretty much a common-or-garden modestly talented dreamer of dreams.

And that is a lovely thing to find between book covers. I've known Tim Halladays all my life, and liked them, and found their company and their stories engaging and charming. Spending a few hours with this fictional man, now cresting 70 and on the down-slopes of life; looking back over the life he's led; it all gave me, as I slither into my sixties, a happy and wistful glow. Most gay men don't have children to tell their stories to; Tim Halladay, the stand-in for many an actual man, found Tom Baker's pen and made it work for him. It's a pleasure to spend time in his company.
Posted by Richard at 6:30 AM