THURSDAY, 1:17 P.M. is a very satisfying summer read as well as a deep pool of subtext 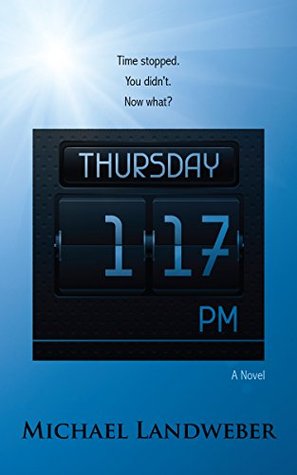 The Publisher Says: Time stopped at 1:17 p.m. on a beautiful Thursday afternoon in Washington, DC. Duck is the only person moving in a world where all other living beings have been frozen into statues in an endless diorama. Duck was already in limbo, having lost his mother to cancer and his father to mental illness. Now, faced with the unimaginable, he approaches his dilemma with the eye of an anthropologist and the heart of a teenager trying to do the right thing under the strangest of circumstances. Ultimately, he realizes that while he doesn’t understand the boundaries between friendship and love, that uncertain territory may be the key to restarting the world.

Says Landweber, “We’ve all wanted to stop time. Thursday, 1:17 p.m. started with the idea that this particular wish could turn into a curse if you weren’t able to start time up again. After the initial thrill of being the last person moving in a frozen world, how would a person deal with the loneliness? Or the temptation to do things that you would never consider doing in the fully functioning world? But what interested me most was turning that potential nightmare into a story about one person finding meaning in a world that makes no sense.”

My Review: This book was offered to me by the publicist, and after many days, I am cheerfully offering my sincere opinion of it: Good stuff!

I think what drew me to the book in the first place was the conceit of a boy living in stopped time after his mother's awful death from cancer, and his father's descent into a world of his own, one so deep that he can't reach out or be reached by anyone. Not even his son. That's isolation! Jacob, known as Duck to friends, experiences something amazing and unprecedented as he escapes home, where his mother's body is being removed: He walks into an intersection without paying attention, in front of a speeding Mercedes that's running a red light, and...nothing. No impact. It's as if time has stopped.

It has. For everyone except Duck. He's alive, he's mobile, he's a free agent in a world of statues. His adventures are just beginning. I'm sure most of us have thought what we'd do in Duck's shoes; his first response is to test the situation, determine if this is a real event by examining the world, experimenting with gravity...still works...and other forces, which don't. ELectromagnetism is halted. Anything relying on electricity like computers and human brains is offline. Water won't flow unless Duck is touching it. More parameters of the social world start to vanish from Duck the longer his situation lasts. He sleeps wherever he is whenever he's tired. It's 1:17p.m. on a lovely sunny day, unchangingly 71 degrees (Fahrenheit)...when to sleep? That's always a problem for those out of step with the rest of the world. And boy is Duck out of step! He runs around naked, playing pranks, redistributing cash from wealthy places like stores and rich mall-goers' wallets, tipping frozen people over, generally acting like a 17-year-old on a bender should. Oh yes, there's all kinds of good stuff he can eat and drink in the restaurants of frozen Washington DC, just so long as he's careful to eat already prepared food, nothing from the kitchen that hasn't been plated. Cooking has, obviously, stopped with the electricity. Natural gas, since it flows mostly like water, isn't moving either.

So here he is, in an abundant world, with easy enough access to all the necessities and luxuries; nothing, then, to do but think. Process the painful past, since he's in an eternal present. He visits his father in the loony bin, trying to make the world start again by using his father's mental disturbance as an oracle. This isn't helpful, but Duck makes the most of it by really digging into his memories of his Dad before the final psychotic break that sent Dad to the bin: Stealing a Duck, the tour bus/boat that's seen in many cities with rivers or big lakes, since he needs an ark for himself and his son to ride out the flood that's coming. Only it doesn't come. A flood of cops, yes; a flood of scared tourists as Dad drives the Duck into the reflecting pool on the Mall. Hence Duck's nickname, a brand of shame until his mother sends him to a private school. Even that wouldn't have helped had it not been for the cool cat in class, Carlos, taking a shine to Duck and enveloping him in the aura of popularity. Duck, Carlos, Mackenzie the uber-rich girl, and Grace the uber-smart and pretty darn rich girl. The Gang of Four. Duck is safe at last.

Nothing stops cancer, but his friends at least keep Duck occupied. They all care about him very much, even Grace and her surgeon parents after they delve into his Mom's condition and give Duck the same news he's already heard: No hope. Terminal. Sad for you, but we will always have a place for you in our home. And he repays them by storming out of their house, blaming them for his mother's death. (I have to think that, as parents of teenagers themselves, they get where he's coming from and hold no grudges.)

It's Grace that Duck wrongs the most, treating her with offhanded discourtesy. He stands her up for her graduation party, he blows her off socially, it's a wonder she doesn't stick a knife in his eye. Mackenzie does much the same thing to him. Carlos is above it all, his diplomat parents having instilled in him the ability to slip unscathed through muddy emotional waters filled with piranhas.

While the world is stopped, Duck looks into his friends' houses and lives: Mackenzie, well, she's not the little lady he'd hoped for; Carlos's parents are in mid-fuck, which clearly isn't something Duck would see any other time or way; Grace is nowhere to be found. Not at her summer internship. Not at home. Duck gets worried enough to check their secret stashes: Lunchboxes, vintage lunchboxes that Grace compelled Duck to buy with her. They agreed to keep their you'll-know-when-it's-time secret stuff in them. He finds Grace's suicide note. It directs him to her family's cabin seventy miles away.

Riding a stolen bike with a kid carrier attached, Duck makes it to West Virginia after riding through a thunderstorm. He takes the chance to get close to a bolt of lightning, not something you're ever likely to be able to do safely when time is unstopped, but who wouldn't want to see what lightning really looks like?

What he finds makes him into the ultimate MacGyver master. Grace has thrown herself out the window, aiming for some spiky rocks. Duck creates a soft landing place for her by stealing every mattress and sofa cushion from all the houses he can see. That way when he touches Grace's foot and she falls, she won't be hurt. And that's now of paramount importance to him because, in addition to her suicide note, Grace also left a packet of Carlos's letters to her, loving, warm letters indicating a relationship Duck knew nothing about between two of his best friends. Grace has clearly told Carlos that her real feelings are for Duck, and Carlos knows just what to do: break off their relationship and go back to being friends. Duck reads the letters and knows, the way you do, that he's in love with Grace and always was.

In the end, Duck does unfreeze the world after he has made as many things right as he can. He is now sorted out, emotionally stable in his grief, and ready to meet life on life's terms. It's a good, satisfying way to end a book. This is very much a summer page-turner with subtleties that you'll have to read for yourself. Enjoyed as a tale, it's fine; looking into the shadows cast by the rich subtexts all through the book makes the experience much richer. But either way, read it soon. It will repay you with interest.
Posted by Richard at 6:00 PM