BROWN BOTTLE: A NOVEL by Sheldon Lee Compton, honed like a knife & wielded without mercy 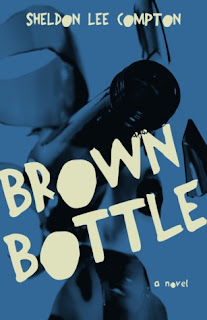 The Publisher Says: Wade “Brown Bottle” Taylor is an alcoholic trying to protect his nephew Nick from the hardness of their region, Eastern Kentucky, and the world in general. He must end Nick's involvement with drugs and drug dealers in the area, and, fueled by his love for his nephew, Brown knows he must be the one to intervene to save him. But in order to save Nick, Brown must first save himself, overcoming a lifetime spent convinced he was unworthy. Brown Bottle's journey is one of selflessness and love, redemption and sacrifice, if only for a time.

My Review: When I saw that Donald Ray Pollock, of KNOCKEMSTIFF fame, called the author of this novel "a hillbilly Bukowski," that was it. I asked Bottom Dog Press for a review copy and was blessed with one. And let me say this right up front: Pollock's assessment is spot-on.

"Brown Bottle" is the unkind-yet-accurate nickname given to Wade Taylor, co-centerpiece of the story's arc with Stan Collins. Brown is an alcoholic and a Vietnam vet. Stan is a plain, common-or-garden alcoholic. They live in Portville, Port County, the farthest eastern stretch of Kentucky. Coal was king until the 1970s, and now opiods and meth are the kings. Sadly, the two alcoholic tough men (who don't indulge in drug use) each have a beloved relative involved with drugs. Brown's nephew Nick, abandoned by his mother when at the most annoying rebellious stage of adolescence, is a drug user and petty thief; Stan's little brother Tuck is the picture of the repulsive little guy who deals to feel big:


Tuck had always been made smaller made than Stan. Narrow shoulders, tiny hands and short fingers. Even as a young man his brown eyes were always watering like he'd been crying and his face never took hair well. What he had instead were four or five patches of hair that looked like a cluster of bee stingers popping straight out from his cheeks.

It's not tough to work out the conflict that inevitably will arise between the strong protectors of these weak men. Nick is the North Star in Brown's sky, the one decent thing he thinks that's ever come out of Port County Taylors. He felt that way about Mary, Nick's mama, until she walked away and left Brown in charge (or not, it didn't seem to matter to her as she skedaddled to Ohio with some kind of snake-oil sellin' preacher) of Nick's arrival into manhood.

And here's Stan, living across the highway from Tuck's trailer, watching the streams of vehicles come, park, and go in minutes flat. He hates that this crazy business has made his brother a prisoner of drug suppliers and users, skittering from pillar to post in order to balance supply and demand. He himself is a disabled miner, a man of no use to anyone except his wife Hen (short for Henry, don't know why she's named that) and wanting to save Tuck. This being the Appalachians with the culture of self-reliance and clannishness that is native to hardscrabble places the world over, Stan doesn't figure on calling in the troopers unless forced to. He figured without Brown's iron determination to cut Nick off at the supply end of his drug habit.

So what's a protective uncle to do? Scare the living daylights out of Tuck, that's what. Bust in the trailer door, shake the little rat around some, make sure he thinks twice and doesn't sell Nick another snort. Good plan. But Hen, though she's not Tuck's biggest fan, also has a reason to keep the scrawny little shit alive: Stan's disability and her joblessness don't make ends meet, but when Hen sells some opiods on the side for Tuck the books balance. Like most American households, the wife is the paymaster, so Stan's oblivious to the source of their continued (relative) comfort. Hen sees Brown breaking in the trailer door, fears the worst, and calls the cops.

Now cops aren't, public opinion aside, blind, deaf, and dum-dums. The local deputy, Dan, knows there's mischief being made in Tuck's trailer. He has reason to worry because his only daughter is dating Brown's nephew Nick, and that can't be good for her sobriety. Since Dan's local aristocracy (used to run the local IGA Foodliner, inherited from his daddy), he takes it as a personal affront on all levels that he can't quite prove the reality of illegality going on under his nose. He can, and does, have the place under surveillance, so when Hen's 911 call is radioed out, the response is swift. Not so good for Brown, caught in the act of smacking Tuck around. But no one in Port County doesn't know Brown was a babykiller in Vietnam so they're all scared of him; he's a drunk, so they're scared he'll wow out while sloshed; and his crusade to save his nephew isn't news, either. Sentenced to AA meetings, big whoop.

Nick and Ashley, Dan's daughter, are late to the party at the trailer, finding Tuck gone and the place empty. They decide it's time for them to be big kids about their habit and break into the trailer to steal some supplies. It turns out the supplies are very, very abundant. The plan changes from steal some and use to steal all and set up as dealers. It's Tuck's way of buying really nice stuff for his crappy trailer and they have plans to set up house and get married when they get some money....

What they don't know is that Brown used the AA meeting to make some discoveries and now has Tuck all trussed up in his hunting camp, a place full of Brown's past:


{T}here hung that mirror still. Splotches like mold or something had collected from the corners toward the middle, but Brown was able to see enough of himself in it to feel a fair amount of disgust. No more than the usual amount. He scratched at his chin growth. Did a rat eat your razors? That's what his daddy would say. He wished his chin jutted out more like Clint Eastwood or James Dean or whotheheckever. Instead, you could barely see his chin, it hid so far back against his neck.

The wheels of tragedy are now set in motion. Self-loathing, the need to redeem something from a painfully wasted life, and the sheer revulsion of the strong for the weak cause Brown to plan Tuck's carefully hidden demise. Sadly, Tuck's victims Nick and Ashley have also concluded that Tuck needs taking out; it's sad because, unlike Brown, these two can't bring themselves to do the deed personally, so they turn to Port County's resident no-fail contract killer:


There were a lot of botched kills throughout the eastern part of Kentucky when the work fell outside his control. Six or seven years ago, a man from Perry County was shot point blank in the head and left for dead in the middle of downtown. Problem was, the bullet had traveled between the man's scalp and his skull halfway across his head and exited the same way it had entered on the other side. The whole thing had left him with only fingernail-sized contusions on both sides of his head. He identified the guy who shot him and saw him arrested and convicted of attempted murder.
Now, it's true that a situation like that was a rare one, but part of doing a job right was minimizing the chance for something to go wrong.

The callousness of this internal monologue is courtesy of Fay, an Ulsterman and killer for his side in Ireland. He's known to everyone in the area, and they're more scared of him than of Brown or the law. Good reason to be, after all, since he lives quite nicely on no visible means of support and there's no shortage of disappeared, presumed dead, enemies in Port County. Nick and Ashley decide to hire him to eliminate Tuck while making the mistake of telling Fay how they plan to get the money to pay him.

Stan's hunting for Tuck. Brown's hunting for Nick and Ashley. Fay's abusing Ashley's mother to get the name of her supplier, Hen. Hen's trying to stop everything from spinning out of control. Dan's sure that if he gets hold of one of these people, he'll unravel the whole mess without any noticeable bloodshed (maybe Tuck dies, oh dear oh well). Fay and Stan and Hen and Brown and Tuck...it's a helluva ride, there are deaths good and bad, and in the end the price owed to the law is paid by Nick and Ashley, who go to prison for possession with the intent to deal narcotics since they stole Tuck's stock.

In the end, Brown's is the one purpose served. Nick comes out of prison early, sober at last. He knows to whom he owes his thanks, the thanks he's too late to deliver:


He's on the school bus and Uncle Wade is standing outside the window. The bus hasn't pulled out yet and Uncle Wade is punching the air and ducking his head and giving him a thumbs up sign and then a big smile. The big smile says do not worry. It says you can do this. ... His smile says a lot and so do his punching hands and his hooked thumbs, and before everything else it can possibly say, it says the thing Nick needs most. The big smile says I love you.

Too late, too late; a job well done by a man ill-used from every quarter.

Sheldon Lee Compton jumps onto my must-buy list with this dizzyingly fast-paced, beautifully choreographed, blood-soaked book. And will someone please tell Norman Reedus that his Oscar-winning role's right here in this book?
Posted by Richard at 6:30 AM