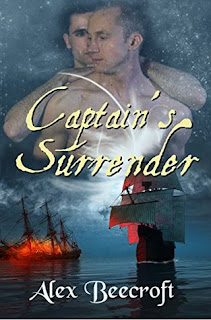 The Publisher Says: Ambitious and handsome, Joshua Andrews has always valued his life too much to take unnecessary risks. Then he lays eyes on the elegant picture of perfection that is Peter Kenyon. Soon to be promoted to captain, Peter Kenyon is the darling of the Bermuda garrison. With a string of successes behind him and a suitable bride lined up to share his future, Peter seems completely out of reach to Joshua. But when the two men are thrown together to serve during a long voyage under a sadistic commander with a mutinous crew, they discover unexpected friendship. As the tension on board their vessel heats up, the closeness they feel for one another intensifies and both officers find themselves unable to rein in their passion. Let yourself be transported back to a time when love between two men in the British Navy was punishable by death, and to a story about love, about honor, but most of all, about a Captain's Surrender.

My Review: I gave this book to my friend Frank the Fireman, since like the main character, Peter Kenyon, he is an adult out-comer. I wanted him to, in particular, notice the last chapter wherein Peter goes through the long, dark night of the soul as he struggles between the lifelong conditioning he's heir to...the societal and legal issues surrounding being queer in the Royal Navy of the 18th century...and his love for Joshua Andrews, his best friend, former ship-mate, and one true love.

I didn't mention that I wanted him to notice that chapter, I just sat and hoped. I was rewarded by a phone call. Frank was shaken, saying he'd done almost the precise same minuet of fear, anger, doubt, fear, rage, lust and...in the end...honest peace.

I told him the author was a woman. He didn't say anything for a minute. "Lesbian?" he asked. "No. Married with kids." "That is one lucky man," was Frank's response.

This book fulfills a long-felt absence in my reading life. It's an historical sea-novel, with nicely handled battle scenes and an authentic-feeling atmosphere of male camaraderie. Its flaws include a rather cavalier approach to time, as in there is no indication that the characters have to wait the extended periods they would really have been forced to endure for news, for travel, for anything. Also bothersome are some absences...backstory mostly, but also some characters have unresolved storylines, and I don't mean opening-for-sequel unresolved, I mean holes. The antagonist of Peter and Joshua is the first one who springs to mind, since he's presented in one dimension and never seen to have reasons for his actions beyond moving the plot along.

I make this point because the book is getting a four-star rating. It's not perfect, I'd really really like to see more of the men's backgrounds even if in flashback for example, but it's a beautifully realized love story with excellent atmospherics and a happy ending...and a Happy Ending, too. Well done, Mrs Beecroft, and do it again soon.
Posted by Richard at 6:30 AM