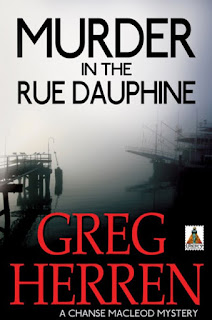 The Publisher Says: For gay New Orleans private eye Chanse MacLeod, it seemed like a simple case: find out who was blackmailing his pretty-boy client's rich, closeted boyfriend, collect a nice check, and take some time off. But then the pretty boy turns up dead in what looks like a hate crime and the gay community of New Orleans is up in arms, demanding justice. In the stifling heat of a New Orleans summer, Chanse searches for an extremely clever killer on a trail leading to a gay rights organization, boys for hire, and New Orleans society, knowing he has to find the killer before the entire city explodes.

My Review: Chanse MacLeod, former LSU football star, New Orleans policeman, and present-day private detective, gets a client in the most appealing possible way for a gay male mystery: His hottie hirer picks him out, and up, at the gym. Hunky Mike Hansen is, wait for it, in love with a rich, married, closeted doctor who is being blackmailed. Mike arranges to meet Chanse at Mike's home, after getting the incriminating blackmail tape from Dr. Delicious McWallet. (We don't find out his real name until well into the book.) Chanse, worn out from the workout and still sad over his peripatetic lover's departure for another multi-day trip as a flight attendant, oversleeps and is an hour late for their meeting. Darn good thing, too, since if he'd been on time, he'd've seen Mike being murdered.

Discovering the body, reporting the murder to his former colleagues at NOPD, and then trying to stay out of the circus that ensues is the meat of this short first mystery in a series by author and anthologist Herren. Gold diggers, horny creeps, jaded reporters, single-minded do-gooders, whores and whoremongers jig and caper through Herren's pre-Katrina French Quarter and Faubourg Marigny. MacLeod's laconic page presence still allows for character development, since we're in first person. What solves the mystery is an attempted murder that, for a wonder, vivifies the term "feed 'em to the fishes." The resolution is in no way a surprise, but the way it arrives is fun.

I'm not sure Chanse would give my fat carcass the time of day, muscle queen that he is, but I don't mind hitchhiking on his betank-topped muscular shoulder. The book is a fantasy, and it's not played for realism, but it's got some good character bases for a long-legged series: gruff black lady cop, honest and forthright, whom everyone erroneously assumes to be a lesbian; Chanse's hag, reporter Paige Tourneur, is appealingly damaged and quite obviously hangin' with his hunky self out of self-protection, so fertile ground for fun developments; Chanse's lover the air mattress (gay male slang for stewards), who commits the Unpardonable Sin of saying "I love you" to Chanse not once, oh no we can ignore that, but TWICE! Chanse's attack of the fantods led me to the mirror to see if maybe Herren had a camera in there...and leads Chanse to the brink of an affair with a most, most inappropriate man.

Enjoyable fluff, this. I wish the author's editor had made him do a few of the obvious development tricks, delving just a wee bit deeper into the recurring characters' pasts, but all in all this is a good and solid effort. It lacks suspense to an almost fatal degree as a mystery, but it makes up for it in blithe and quick-witted writing. Book 2, Murder in the Rue St. Ann, awaits on the nightstand. It's only 1am, I can fit in 50pp or so, can't I?
Posted by Richard at 6:30 AM