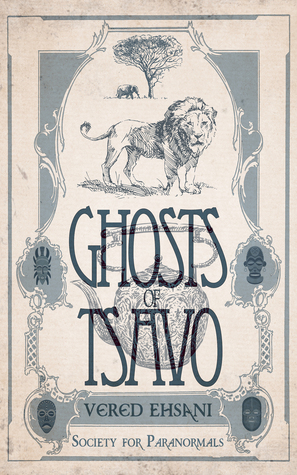 The Publisher Says: Armed with Victorian etiquette, a fully loaded walking stick and a dead husband, Beatrice Knight arrives in colonial Kenya desperate for a pot of tea and a pinch of cinnamon. But she’ll need more than that if she’s to unravel the mystery of the Ghosts of Tsavo without being eaten in the process. All this while surviving the machinations of her best friend’s dashing godfather and the efforts of her safari guide to feed her to any lion willing to drag her away. What is a ghost-chasing widow to do?

This is Case #1 in the “Society for Paranormals” series: A series concerning dead husbands, African legends and the search for a perfect spot of tea. For those readers who adore “Pride & Prejudice” and would love to experience “The Parasol Protectorate” set in colonial Africa, this is for you!

My Review: A possessed zebra, "ghost" lions who turn out to be shape-shifters, an automaton with many exciting characteristics (including a ghost-in-residence who happens to be the narratrix's dead husband), a Dursleyesque family far from Privet Lane and therefore even more disagreeable than usual...it's all here, and all the moving parts are managed by our narratrix, Mrs. Knight. Bee to her most unpleasant aunt, Mrs. Steward, whose unpaid labor keeps the Steward house running. Certainly Jonas, their one African servant, isn't much help. He's unfamiliar with tea and toast, those urgent requirements of the entire British race. He has a wonderful survival knack, though, simply listening to Mrs. Steward bloviate and inserting "yes, mama" into the spaces made by her inhalations to bloviate some more.

The barely-more-than-tent-city that is Nairobi, British East Africa, upon the Steward ménage's arrival, meets with vocal disapproval from the ladies of the party, though Bobby the 12 year old son is unaware of anything about the place except that he'll get to go lion hunting. Bee, in her ever-unflappable way (how would one frighten a lady accustomed to sniffing out and dealing with werewolves?), sets the house to rights just in time to greet her shipboard friend Cilla, come to Nairobi to stay with her handsome, unsettlingly odd godfather Mr. Timmons. The Steward ladies find Mr. Timmons' presence makes the African savannah much more palatable. Lilly, the daughter of the house, is in the market for a husband as she was forced to leave London on the eve of her grand Coming Out. Bee doesn't quite know why Mr. Timmons affects her so negatively, but as an investigator of things paranormal, she has learned the long and hard way to trust the prickings of her thumbs.

But, as is usual in slightly romantic books, Mrs. Knight and Mr. Timmons are thrown together to solve the mystery of the "ghost" lions while preventing the baying packs of foolish British hunters from killing their mutual prey before the two paranormals can discover what exactly they are. As the hunt fails spectacularly on its first night (lions are, keep in mind, nocturnal hunters) and the camp is brought to a state of swirling chaos by the disappearance of the aforementioned automaton (and with it the lively ghost of Gideon Knight), seeds are sown that will reap a bitter harvest quite soon.

A mysterious, tall, dark, and handsome African paranormal contact called Kam has been communicating with Bee since her arrival in Nairobi. He appears and disappears with disconcerting silence and always utters unsettling, sibylline warning-cum-instructions that Bee must decipher in order to navigate hazardous paranormal surroundings new to her. It is his major revelation to Bee about the nature of the ghost/shape-shifting lions that propels the wild, careening ride in the last third of the story. Bee and Kam hatch a desperate plan to save the more recalcitrant of the target lions from the bumbling Great White Hunters...and unexpectedly from Mr. Timmons as well. After the comical success of this silly plan, a conversation between Bee and Mr. Timmons reveals information she would greatly prefer not to know about the living and desperately needs not to believe about the dead.

It's a rollicking good ride, similar in its tenor and pace to the much-beloved Chronicles of St Marys by Jodi Taylor. I'm very much looking forward to future installments in the series, three more already being available. I expect that they will fill in some bits of Bee's story, such as an alluded-to previous trip to Africa, West Africa that time, that has left Bee with a disfigured right ear and a goddess who appears as a praying mantis--yuck!--of any size she wishes--yikes!--as a bitter enemy.

Yes indeed, a good time will be had by all!
Posted by Richard at 6:30 AM