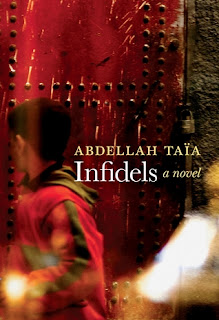 The Publisher Says: Set in Salé, Morocco—the hometown Abdellah Taïa fled but to which he returns again and again in his acclaimed fiction and films—Infidels follows the life of Jallal, the son of a prostitute witch doctor—"a woman who knew men, humanity, better than anyone. In sex. Beyond sex." As a ten-year-old sidekick to his mother, Jallal spits in the face of her enemies both real and imagined.

The cast of characters that rush into their lives are unforgettable for their dreams of love and belonging that unravel in turn. Built as a series of monologues that are emotionally relentless—a mix of confession, heart's murmuring, and shouting match—the book follows Jallal out of boyhood on the path to Jihad. It's a path that surprises even him.

My Review: Stellar, stellar read. I was sent to the online translation-dictionary at least 10 times, which is a good thing for me. It's a genuine pleasure to look at and hold, as you'd expect from a Seven Stories book. The story only makes the aesthetic pleasure better, as well-crafted as such a concentrated fiction can possibly be.

As with all of Taïa's writing, this is a spectacularly beautiful-sounding text.


War was declared from the very first note. This woman...was not afraid of repeating herself, of saying the same words over and over, fighting a solitary battle. The battle of love, of course.

It took our breath away.
The song lasted almost seven minutes. It was so powerful. And the voice...rang out from the heart of the war. War to the bitter end, the final breath. ...
"The man she's talking about in that song doesn't exist. No man can be worthy of such love and sacrifice."

You will never know how much the moment costs while you're in it, but that is the precise inflection point where a youth becomes a warrior.

It is Part III that seems to cause Muslims the most outrage, the betrayed hurt of being misunderstood from within; Taïa is one of their own! He sends young Jallal into such pain and loneliness that not even a god could endure; a mother murdered before her body dies and all for what? What justifies the torture of another soul? (Nothing, of course, but there's always a reason even when there can be no excuse.) And here is Mouad, a stranger, a Belgian whose heart heard the Prophet's call; he has parts of Jallal's mother that her son can't see or hear, so naturally he hates the man who usurped his child's place beside his mother.

But it is Mouad who, indirectly, leads Jallal to Mathis-Mahmoud; leads him to a death that is Resurrection and completion.

But God is beyond mere human hates and judgments. Mathis-Mahmoud and Jallal are, in a soliloquy of God's, united and blessed and made whole together.


You see, I'm like you. In misfortune and in power. Divine and orphaned. I'm made of the same stuff as you. I'm in you. In every body. Every night. Every dream.
Don't cry, Jallal.
Take his hand, Mathis.
Go. Go. As brothers of the heart. There, behind that door, life has not even begun for you.
Go. On the way you'll pass a beautiful pomegranate tree. Pick two pomegranates. And later, before you go to sleep, take a moment to eat them.